The U.S. dollar has had a tumultuous year due to the financial market volatility and on-going economic uncertainty caused by the COVID-19 crisis. While investing is always about dollars and cents, few investors focus on the U.S. dollar as an important economic indicator. Just like interest rates, the value of currencies often reflects a wide array of global economic data and, as a medium of exchange, their values also permeate every part of the global economy. The dollar, as the world's reserve currency, plays a central role in this dynamic. How has the value of the dollar changed this year and what does it mean for diversified investors going forward?

Like many financial assets, the dollar can often serve many purposes. For individuals, the value of the dollar is most important when traveling abroad and exchanging currencies which, unfortunately, is less relevant during a global pandemic. Many also see the dollar as a barometer of the country's importance on the global stage. Unfortunately, this doesn't tell the whole story since having a currency that is too strong can be a detriment to U.S. business activity. In reality, for long-term investors and economists, the dollar is an important gauge in these ways:

First, while the dollar is often strong because of its global importance, sometimes a weaker dollar is more beneficial. For instance, from mid-2014 through early 2015, the U.S. dollar appreciated in value by over 20%. This was driven by many factors, including the fact that the U.S. economy was healthy when most regions were still struggling.

The problem is that a stronger dollar often makes it more difficult for U.S. companies to compete abroad since goods and services priced in U.S. dollars become more expensive to foreign buyers. Around 2015, this resulted in an "earnings recession" due to its drag on corporate profits since international revenue has increased in importance for U.S. companies. Thus, having the dollar at a sensible level is often better than a dollar that is too strong.

In the extreme, maintaining a weaker currency without appearing to do so has become a form of geopolitical jujitsu. Many countries have either successfully done or have been accused of doing so. Most recently, the U.S. administration accused China of manipulating its currency by keeping it too weak. In general, it is costly to keep a currency at an artificial level since it requires significant amounts of foreign currency reserves.

Second, as a "safe-haven" asset backed by the full faith and credit of the U.S. government, the dollar can reveal signs of financial stress. This was the case during March when the "flight to safety" spurred significant demand for U.S. dollars. This occurred when the U.S. was beginning to go into lockdown, uncertainty was extremely high, and the stock market was near its lows. The dollar index (DXY) spiked from around 95 to 102 in a matter of days. Fortunately, the dollar has stabilized at a more moderate level since then.

Thus, the final and perhaps most important way to view the U.S. dollar is as an economic indicator. This is because it not only reflects economic and policy expectations for the U.S. relative to the rest of the world, but also affects real economic activity. It's for this reason that the dollar this year has moved alongside economic expectations and the stock market - from the height of uncertainty in March to the on-going recovery today.

The dollar has fallen in value more recently as uncertainty in the economic outlook continues due to rising COVID-19 cases and as the Fed keeps interest rates low. All else equal, low U.S. rates make the dollar less attractive in relative terms compared to other currencies. The good news is that this may help boost U.S. economic activity and support corporate earnings in the quarters to come. Of course, this will depend heavily on the global recovery.

Thus, the way the U.S. dollar has moved this year has reflected the uncertainty faced in financial markets and the economy.  This will continue to be the case as the public health crisis continues and the economy continues to heal. However, it also provides a tailwind for companies if global demand begins to accelerate.

Due to the importance of the U.S. dollar on the stock market and economy, here are three charts that put the dollar in perspective:

1. The dollar has been volatile this year 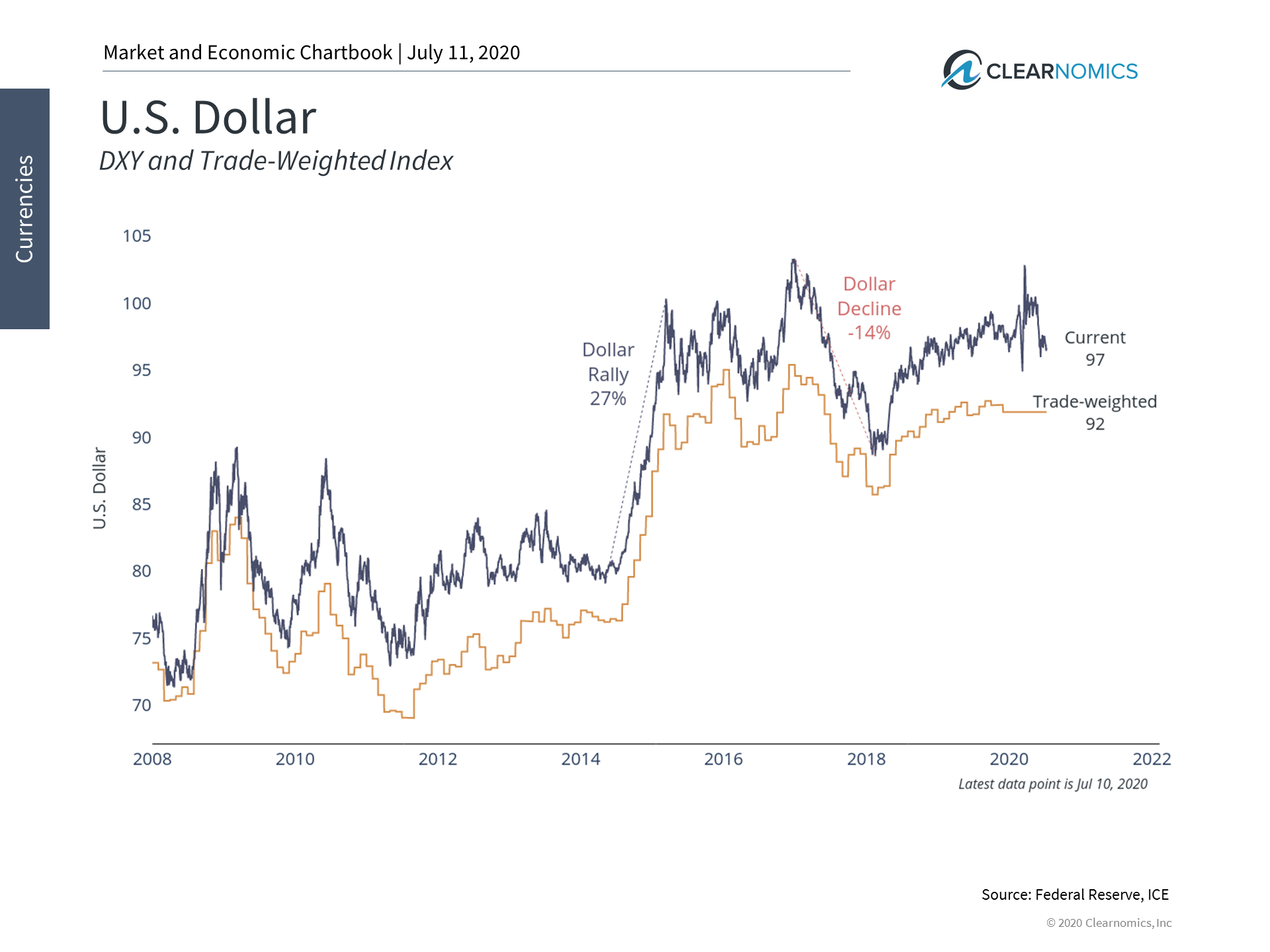 The U.S. dollar has been tumultuous this year. Its value spiked in March at the onset of the COVID-19 crisis in the U.S. as investors flocked to safety. It has stabilized and even fallen since then as markets have calmed.
2. Other currencies have increased in value since 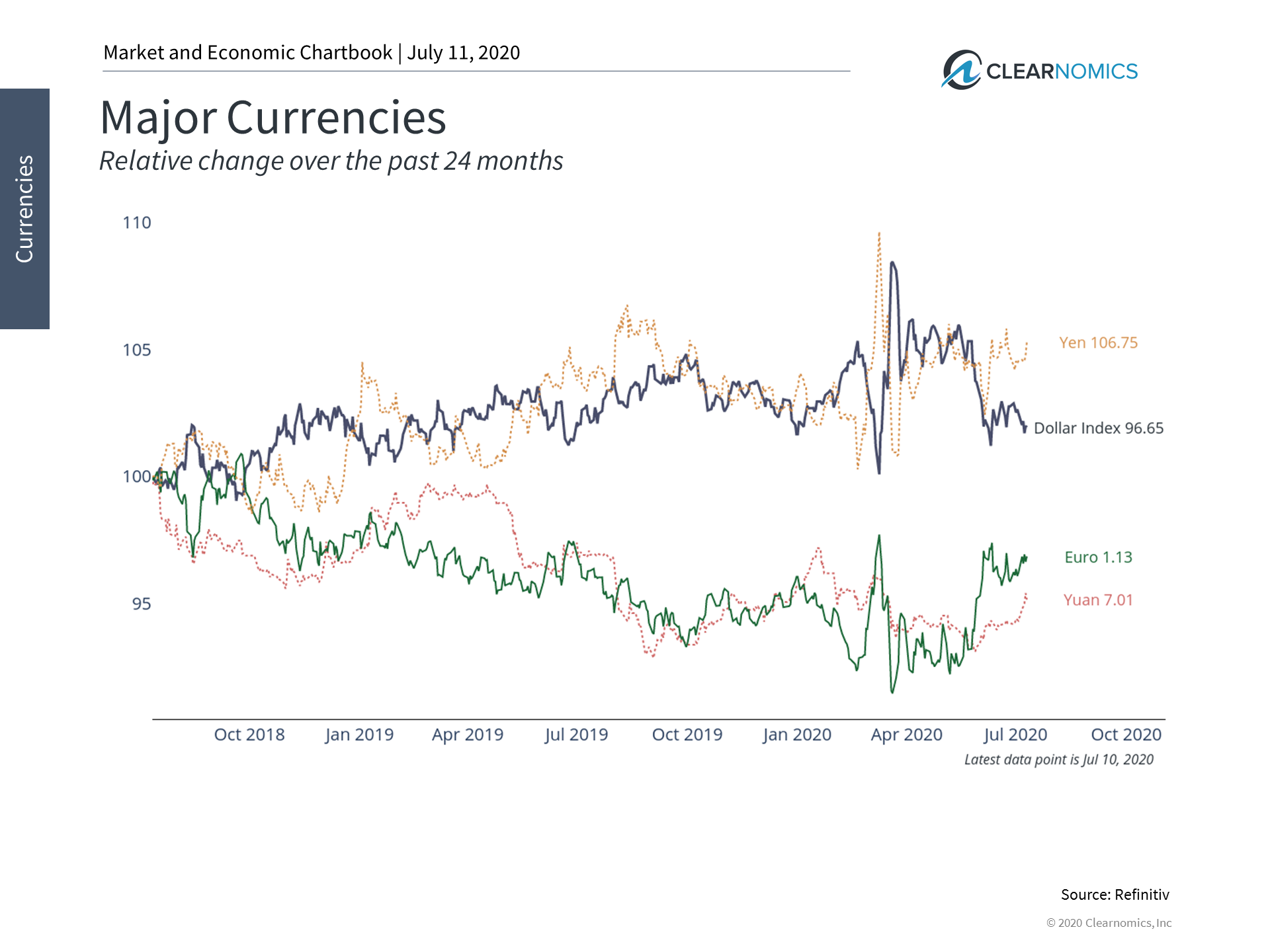 The dollar has fallen in value in recent weeks against other currencies as uncertainty from the novel coronavirus rages on. Additionally, the Fed is expected to maintain its easy monetary policy for the foreseeable future, and uncertainty around U.S. trade relations with other countries has put pressure on the dollar as well.
3. A weaker dollar could support earnings 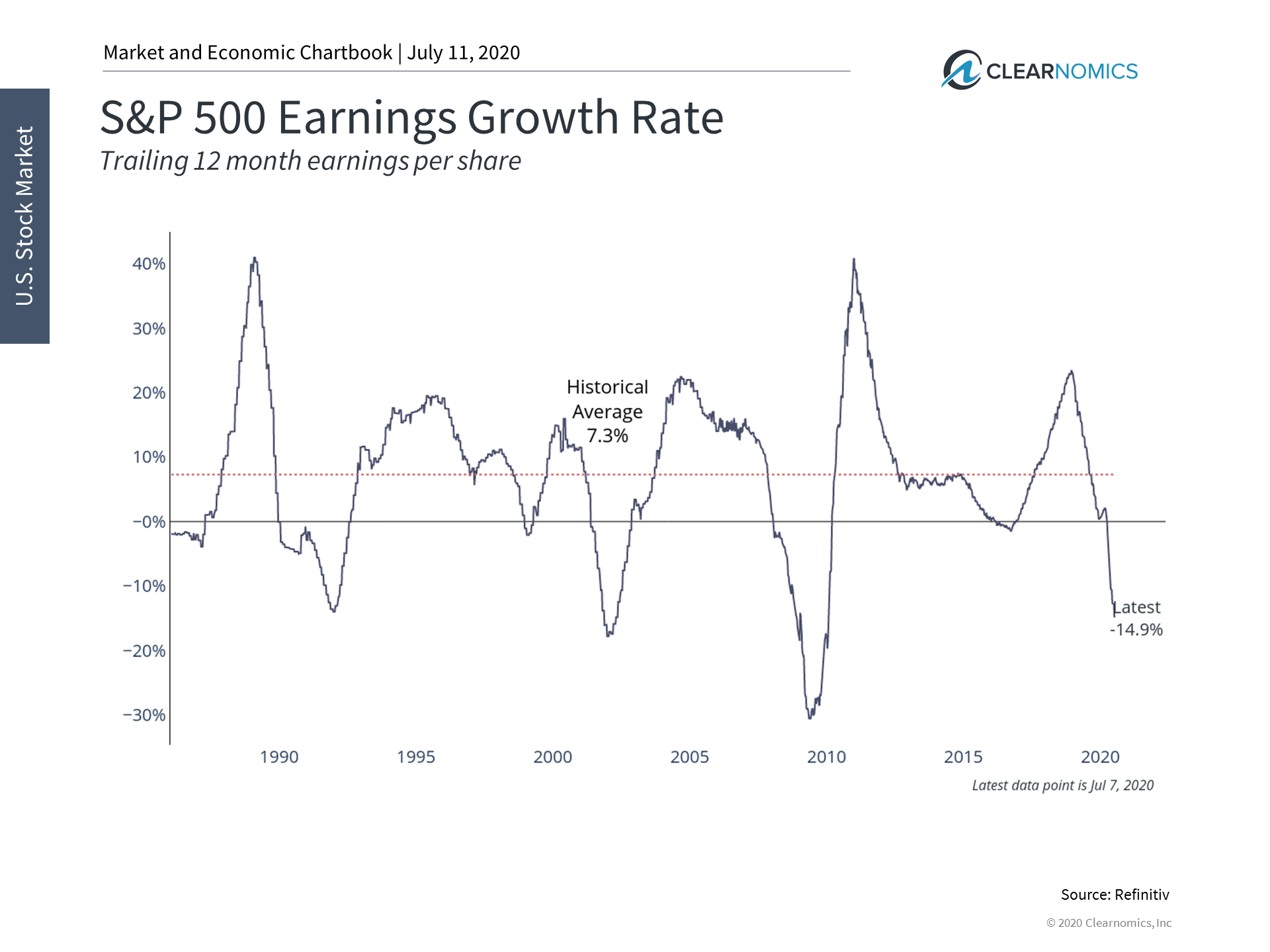 In general, a weaker currency often supports a country's economic activity and corporate earnings. This is especially true for S&P 500 companies which depend heavily on international revenue. Thus, the silver lining to a weaker dollar may be that it helps to support corporate profits in the quarters to come.
The bottom line? The dollar plays an important role in the economy and financial markets. Investors should continue to focus on long-term economic and corporate profits trends which are highlighted by a lower dollar.