After a heated campaign amid a challenging year for all Americans, the presidential election now has a projected winner. Roughly half of the country disagrees with this choice and there are already legal battles in key states. Regardless of one's political views, however, this additional clarity has been enough to keep the stock market moving forward. After all, just as was the case in 2016, investors value certainty nearly just as much as sound economic policy. This is further evidence that investors should neither over-react to short-term headlines nor allow politics to cloud their financial plans.

Where does the market conversation go from here? Many of the issues that resulted in both the bear market and rapid recovery are still front and center, and may change very little in a new administration. The hunt for a vaccine and control of the spreading coronavirus are still central to the public health battle. The results of the Senate race may shed light on the size, possibility and timing of another economic stimulus bill in Congress. And the Fed, which has been supported the economy and markets since its emergency rate cuts in March, will likely continue to do so.

In particular, last week's Fed meeting and press conference, which were lost amid election coverage, emphasized that the Fed will maintain interest rates at zero percent and continue to expand its balance sheet. Their recently updated language emphasizes that this will be their stance until the labor market fully heals and inflation runs well above 2% - which it has not done since the 2008 financial crisis. These actions will likely continue to support financial asset prices, just as they have done over the past twelve years. Those worried about the unintended consequences of loose monetary policy will find little comfort in the Fed's actions.

However, it is clearly the case that although 12.1 million jobs have been regained since the pandemic began, the second half of the labor market recovery may be slower and more difficult. Last week's jobs report showed that 638,000 jobs were created in October. While this is well above the historical norm for a single month, it is a slowdown from the pace since the economy began reopening in May. The unemployment rate has plummeted to 6.9%, but again this is well above the 3.5% rate - a 50 year low - that was achieved before the COVID-19 crisis.

Despite political bickering around the election and the next stimulus package, the stock market has done well over the past eight months. This is because there are many factors that drive financial asset prices beyond these headlines. Since then, the economy reopened, many companies were able to find alternative ways to operate, consumers began to spend again, and companies began to rehire workers and expand. While many parts of the economy are still struggling, this foundation has allowed the stock market to notch strong gains for the year.

In the end, 2020 and 2021 will likely represent two lost years of economic and profits growth, based on consensus economist and analyst estimates. This has not meant that the market would wait until GDP is fully recovered. Rather, the stock market considers new information quickly and is always forward-looking. The fact that there is more clarity today, in all of the factors discussed above, has allowed the stock market to approach new highs just months after the pandemic began.

This doesn't mean the stock market only goes up or that it is always right. However, it's a reminder to investors that focusing on long-term trends, rather than short-term events, is still the key to achieving financial goals over years and decades. Below are three charts that can help put the current market and economic environment in perspective after the election.

1. The Fed has pledged to support the economy and markets 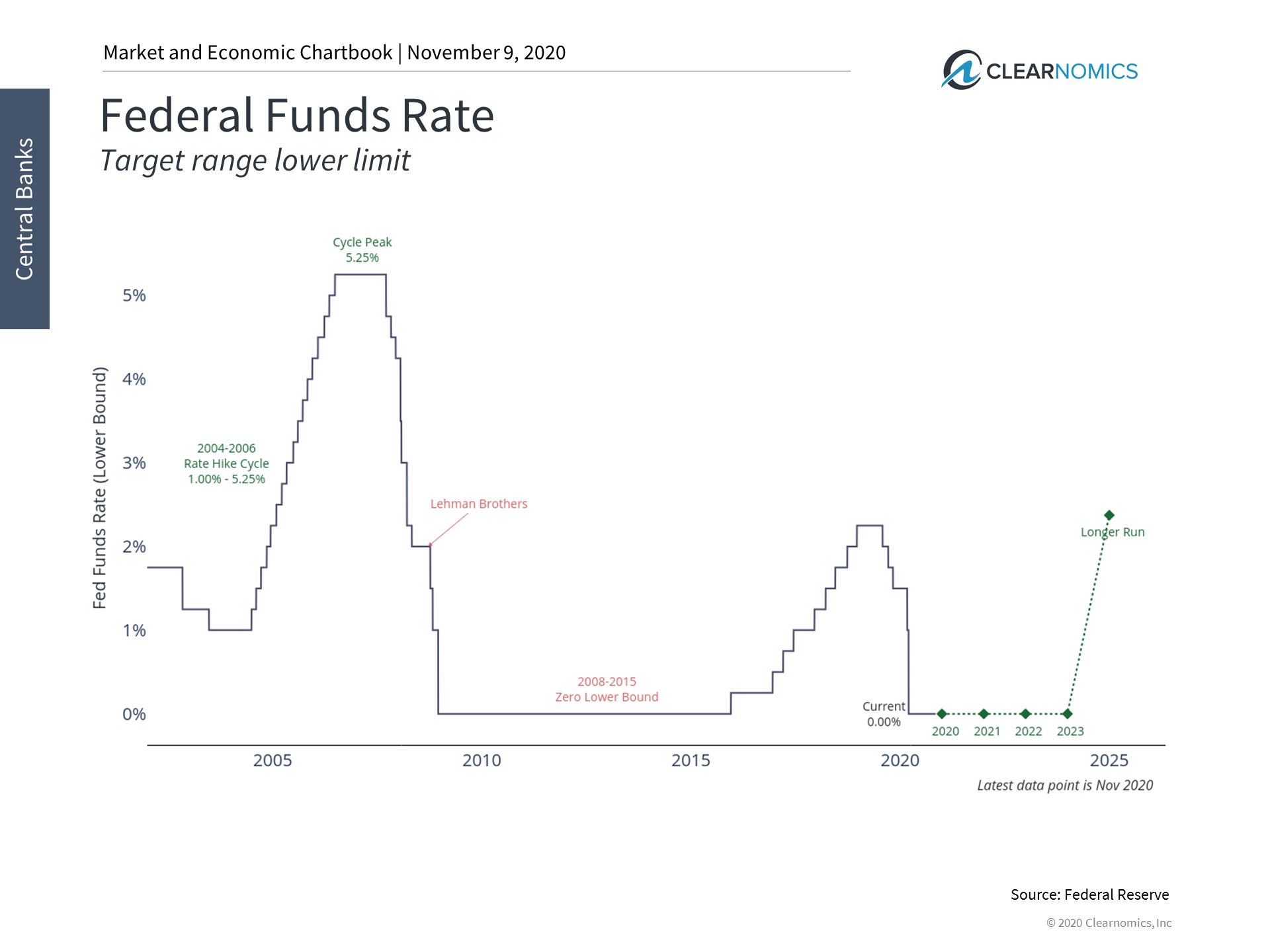 The FOMC has emphasized that it will seek to keep interest rates low and monetary policy accommodative until the job market has fully healed and inflation has accelerated past 2% for some time. For investors, this likely means that the Fed will be a source of support for markets - for good or ill - through the next couple years.
2. Jobs continue to return but the second half of the recovery will be more challenging 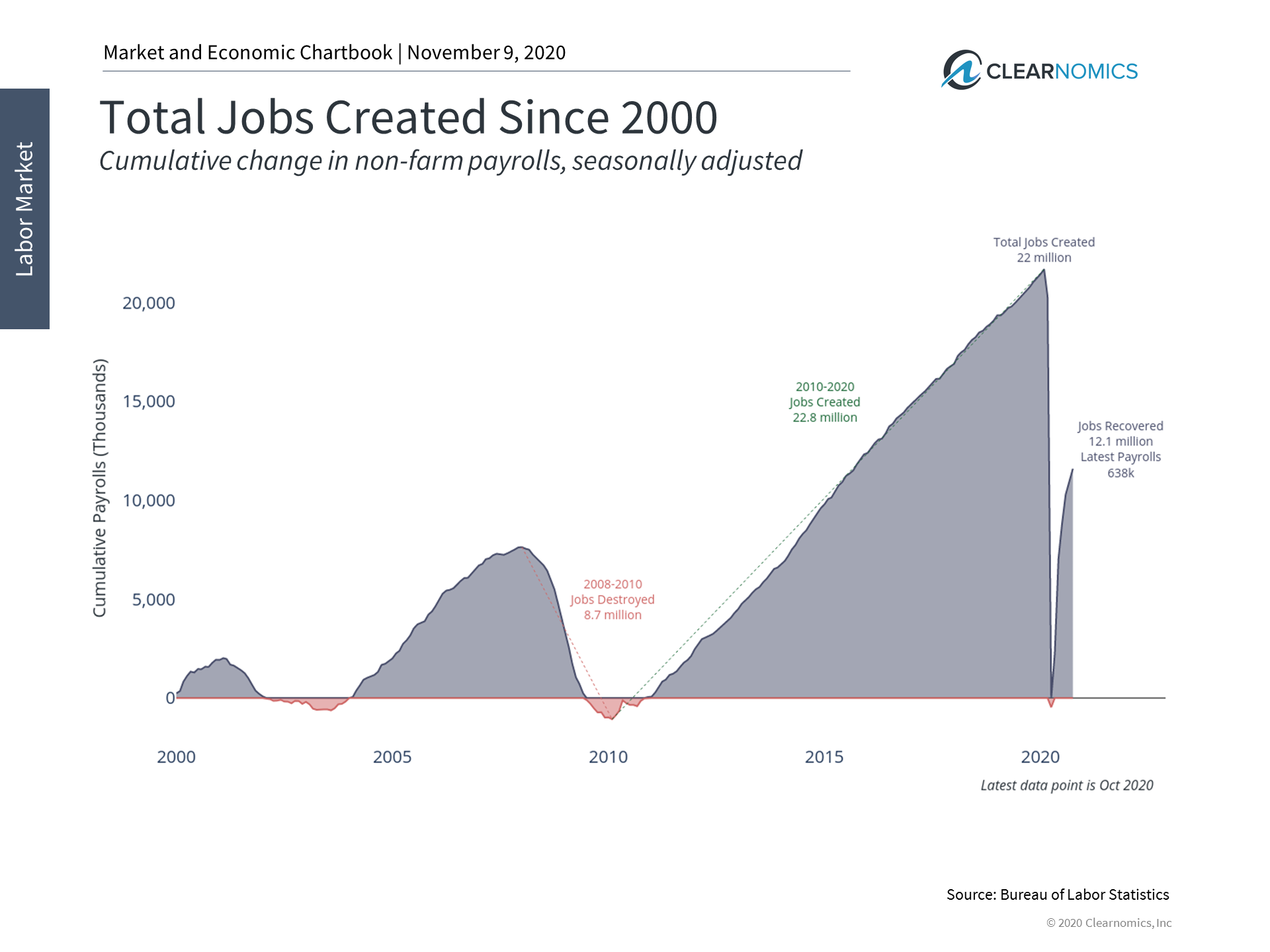 Last week's jobs report showed that hiring activity continues to return much faster than average. At this point, more than half of the jobs that were lost have been regained. However, the pace is slowing as parts of the economy directly hit by the pandemic continue to struggle.
3. The stock market has performed well despite the election and pandemic 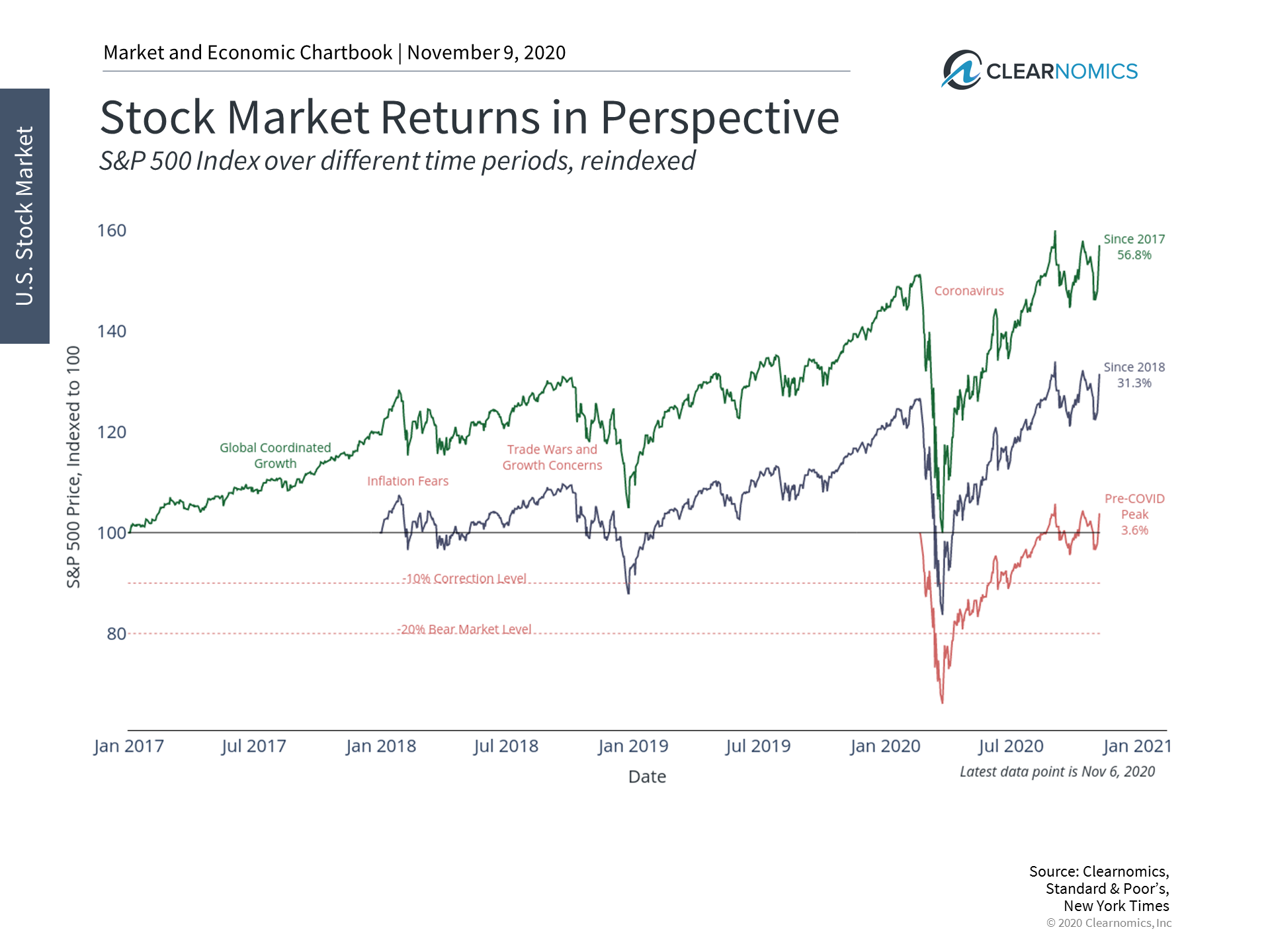 In the wake of the election, despite continued uncertainties, the stock market has been able to approach new highs. While this will depend on continued economic growth and public health developments, this is another reason investors should stay disciplined.
The bottom line? This past year is a reminder that staying focused on long-term trends and maintaining discipline in one's portfolio is the best way to achieve financial goals.