With the economy slowly reopening across the country, the question remains: will consumers feel confident enough to spend? Or will they wait and see, effectively delaying the recovery? While it may take months for the economic data to reveal exactly how consumers feel, there are several indicators today which may be helpful. Given that the stock market is now down less than 6% year-to-date, the pace of this recovery will be important in determining how diversified portfolios perform.

In particular, the housing market may provide some clues as to how consumers will feel about their balance sheets. While housing is often discussed in terms of an investable asset class, it is also an important macro-economic indicator of consumer financial health. Not only are monthly mortgage payments usually the largest expense for many households, but the value of a home is often the largest asset also.

Thus, for many Americans, there is a "wealth effect" associated with the value of one's home, just as there is with one's investment portfolio. The higher and more stable that value is, the higher their perceived net worth and the more willing consumers are to spend. Some of this effect may simply be psychological since, after all, real estate is an illiquid, long-term asset. Still, even the perception of changing asset values may be enough to spark changes in behavior.

While the housing data we have are backward-looking, there are a few important points. First, housing prices were still rising throughout March even as concerns over the novel coronavirus sparked a nationwide shutdown. In fact, housing prices on both a nationwide and 20-city basis reached historic levels despite other economic data plummeting during that period. Unlike in the run-up to 2008, the fundamentals of the housing market were much more sound going into this crisis as well.

Second, more recent data from April show that building permits and housing starts both declined - but not as much as other economic activity. These data measure the amount of activity within the housing sector including actual and anticipated home building. Especially in the case of housing starts, this activity was likely disrupted not by choice, but by the economy-wide lockdown. Similarly, building permit applications would have been disrupted as government and private offices closed.

Third, consumer savings rates have spiked dramatically over the past two months with Americans on average saving one-third of their disposable incomes in April. To put this in perspective, the previous record high occurred in May 1975 when Americans briefly saved 17%. Historically, households tend to save less than 7%. At worst, these savings will help to offset perceived declines in net worth. At best, these savings will help consumers make purchases that were delayed by two or three months.

While it's difficult to separate the inability to spend due to stores being closed from an unwillingness to spend due to economic concerns, the fact is that consumers will have better balance sheets on average coming out of the crisis if asset values hold up. With the stock market having recovered 36% since the March low, housing prices may play a more significant role in consumer confidence.

Of course, there are many other factors that could change both consumer behavior and actual economic outcomes in the coming months. The financial stability of banks, mortgage lenders, homebuilders, and other critical parts of the housing sector will be important, especially with postponed or missed mortgage payments.

Additionally, interest rates remaining low could also help to boost the housing market in the months and quarters to come. A 30-year Treasury yield below 1.5% suggests that 30-year fixed mortgage rates could fall further from their current levels of 3-3.5%, although it may take time for this to be absorbed by lenders and the MBS market.

Ultimately, the housing market will be a critical factor to watch in determining the "wealth effect" on consumer spending. Below are three charts that help to put these economic data in perspective.

1. Housing prices were at all-time highs entering this crisis 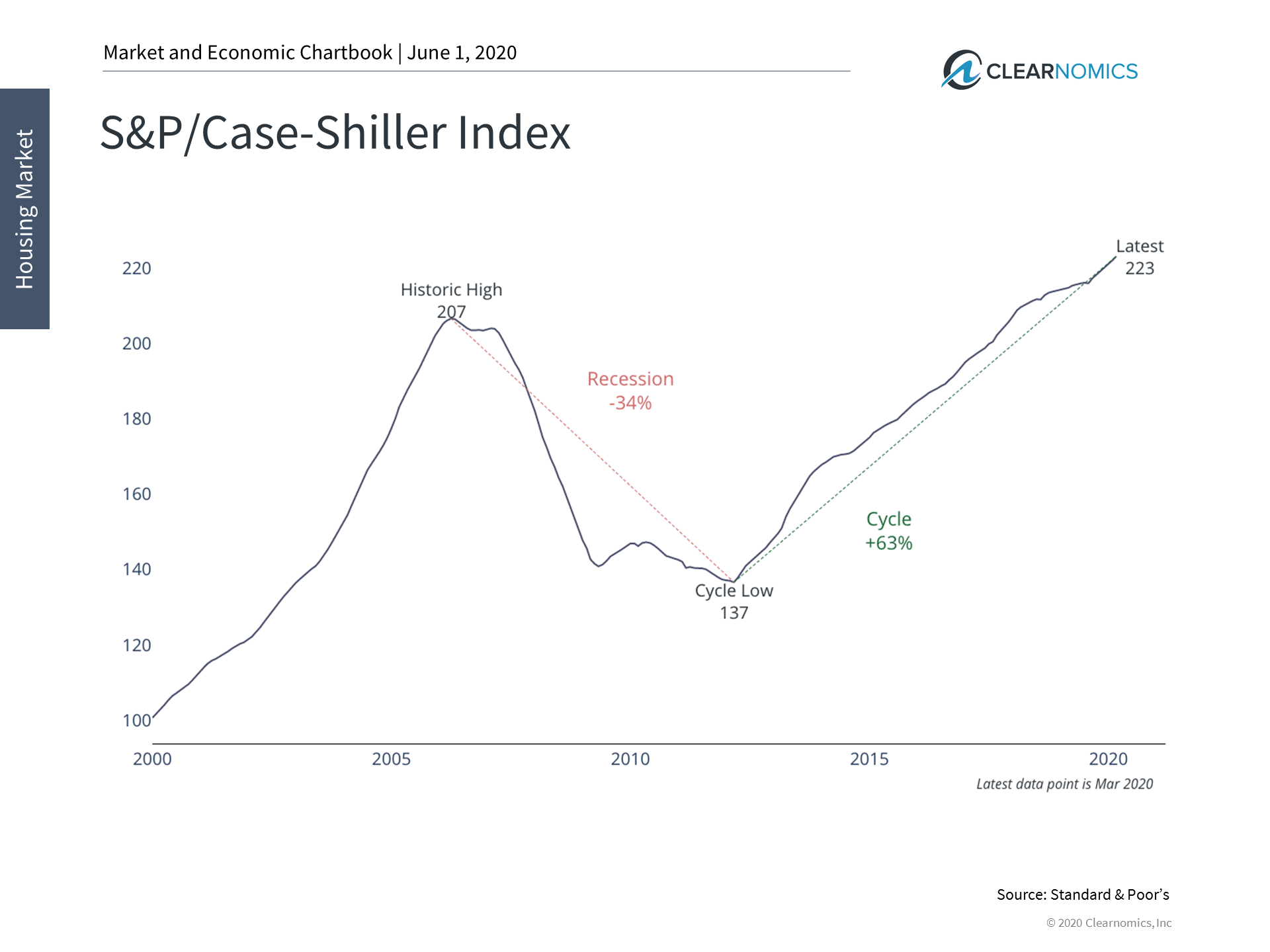 Housing prices were at historic highs across the nation as the coronavirus-induced lockdowns began. Unlike in 2008, the fundamentals of the housing market were much more sound.
2. Homebuilding activity has fallen somewhat 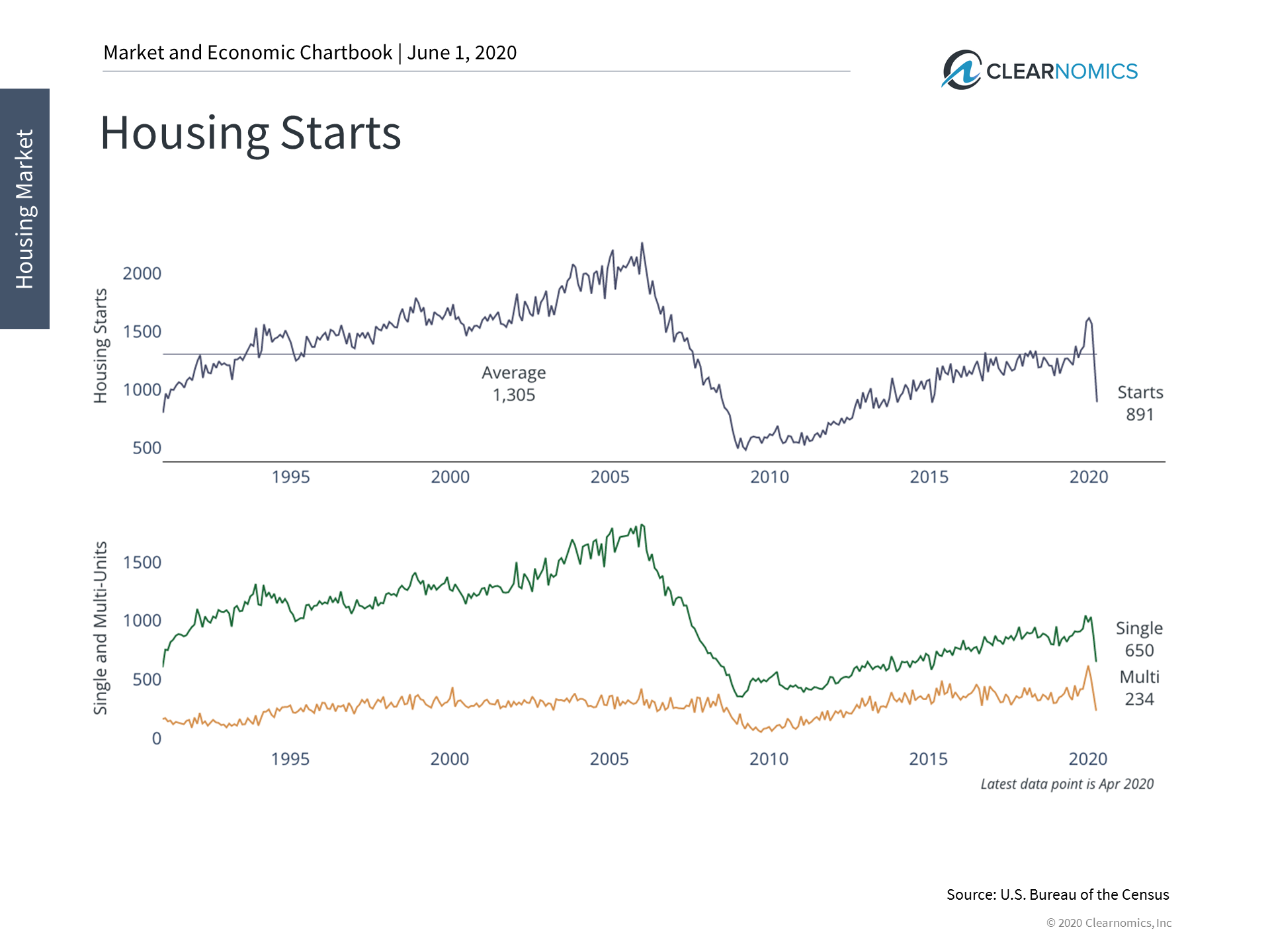 Homebuilding activity - both housing starts and building permits - both declined in April. However, not only did this activity not fall by nearly as much as other economic indicators, but it could resume once the economic opens up.
3. Households are saving at a historically unprecedented rate 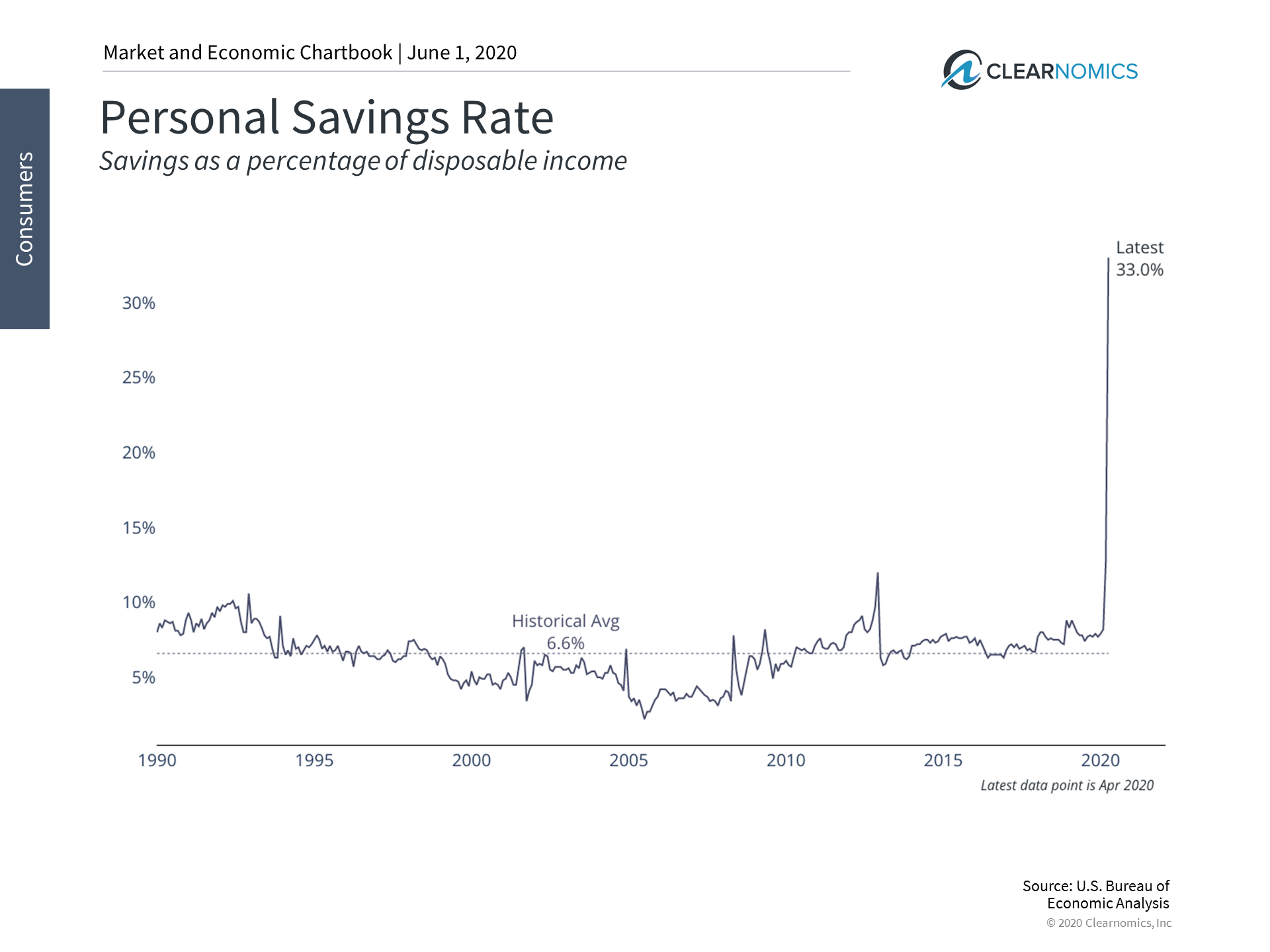 Household savings rates skyrocketed to 33% of disposable income in April. This is the highest rate in history as consumers were both unable to spend in stores and perhaps unwilling to do so due to economic uncertainty. This potentially improves consumer balance sheets as the economic reopens.
The bottom line? Whether consumers are willing to spend will determine the pace of this economic recovery. Long-term investors should focus on these trends and stay diversified as economic growth resumes.