With the stage set for the presidential election in November, some investors may be concerned about the impact of politics on the stock market and economy. After all, the 2016 presidential election resulted in large market swings and the political climate is even more polarized today. On a short-term basis, election headlines have the power to move markets and create stock market volatility. How should investors react to what may be a bitter campaign? Should investors fear either party winning the White House? Is it best to sit on the sidelines until the dust settles?

As citizens, taxpayers and voters, elections are extremely important. This is true regardless of which side of the aisle you're on and which candidate you support. Your vote helps to determine the principles that will be upheld by the country in the years to come.

However, it's important to separate these personal and political feelings from financial plans and investments. When it comes down to it, long-term investors should be wary of claims that one candidate or another will "kill the market" or "ruin the economy." It's likely that this has been said about every president in modern times across 14 presidencies since 1933 (7 from each party).

For instance, this was certainly said about both Presidents Trump and Obama. In 2016, markets plummeted overnight when Candidate Trump became President-elect Trump, only to then reach all-time highs by the end of the year and rally until the COVID-19 crisis. During the 2012 midterm elections, political pundits focused on the Affordable Care Act ("Obamacare") and how it would burden the economy. An investor who bought on election day in 2012 and held until election day 2016 would have experienced a 63% total return, or roughly a 16% average annual return. Throughout these examples and more, investors who over-reacted to politics rather than the underlying economic facts would have missed out on significant portfolio growth.

To be clear, this doesn't guarantee that either candidate has sound economic plans or suggest that their policy proposals and values don't matter. Government policy can certainly have an impact on economic growth, e.g. through corporate taxes and trade, and can also affect specific stocks, bonds, and sectors. However, for most long-term investors, it makes more sense to focus on economic and market fundamentals rather than day-to-day election coverage.

This is because the relationship between politics and the stock market is not a simple and obvious one. While there may be conventional wisdom about how each political party may affect the economy, these views actually have a poor record when it comes to predicting stock market returns. Not only is economic policy difficult to evaluate, implementing and enforcing such policies take time. And even when investor predictions are correct, the market tends to price in these facts well ahead of time.

For instance, one reason for a significant surge in the stock market after 2016 was a recovery from the corporate "earnings recession" of 2015-2016. Similarly, one reason the market performed so well after 2008 and 2012 was that it bounced back from the global financial crisis, Eurozone crisis, and other problems along the way. It's not a stretch to argue that these macro trends would have driven markets irrespective of which party controlled the White House.

This is perhaps best illustrated by the 1990s and early 2000s: the Clinton era happened to coincide with the tech boom while the dot-com bust coincided with the start of the George W. Bush presidency. It would be a stretch to argue that their presidencies caused the boom and bust, respectively.

More importantly, even if there is a large difference in stock market performance, it's clear that returns are positive under both parties. History also tells us that market returns are positive on average during election and non-election years alike. Jumping out of the market due to the outcome of an election, or simply because an election is occurring, is not a decision supported by history.

Thus, the best course of action for long-term investors, regardless of political preference, is to stay invested and maintain the discipline to keep our political and financial lives separate. Below are three charts that put this important topic in perspective.

1. The stock market has performed well under both parties 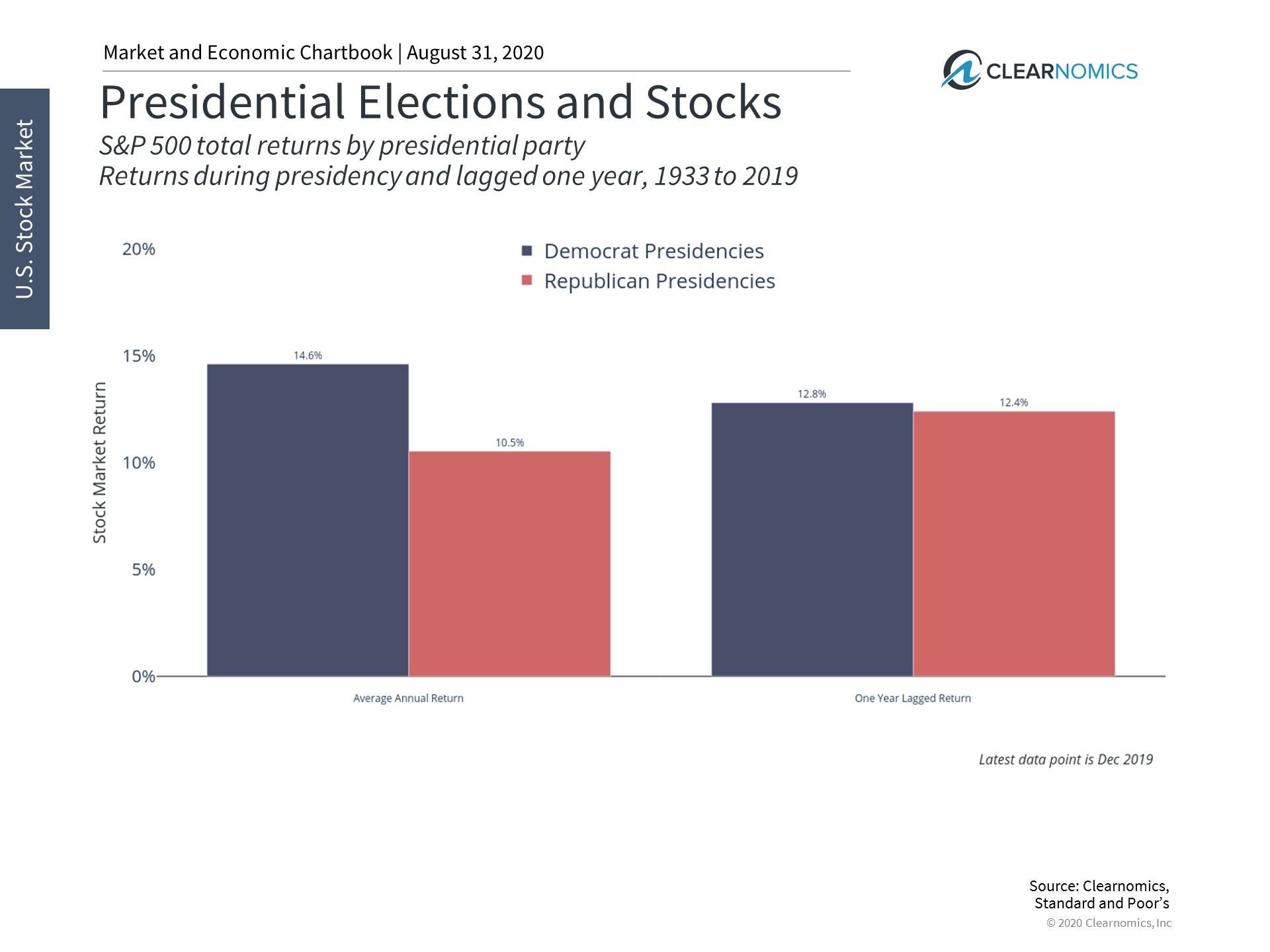 A simple average of stock market returns under Democrats and Republicans shows a clear advantage for Democrats. However, not only are there outliers including the dot-com bust and the 2008 financial crisis that happened to fall under Republican years (and arguably had nothing to do with which party was in office), but it can take years to fully see the effect of economic policies.
Incorporating a lag into the data shows that there's hardly any difference in stock returns between the two parties. More importantly - stock returns are positive on average regardless of presidential party. Thus, making portfolio decisions on the basis of political preference can often backfire.

2. Market returns are historically positive in all years 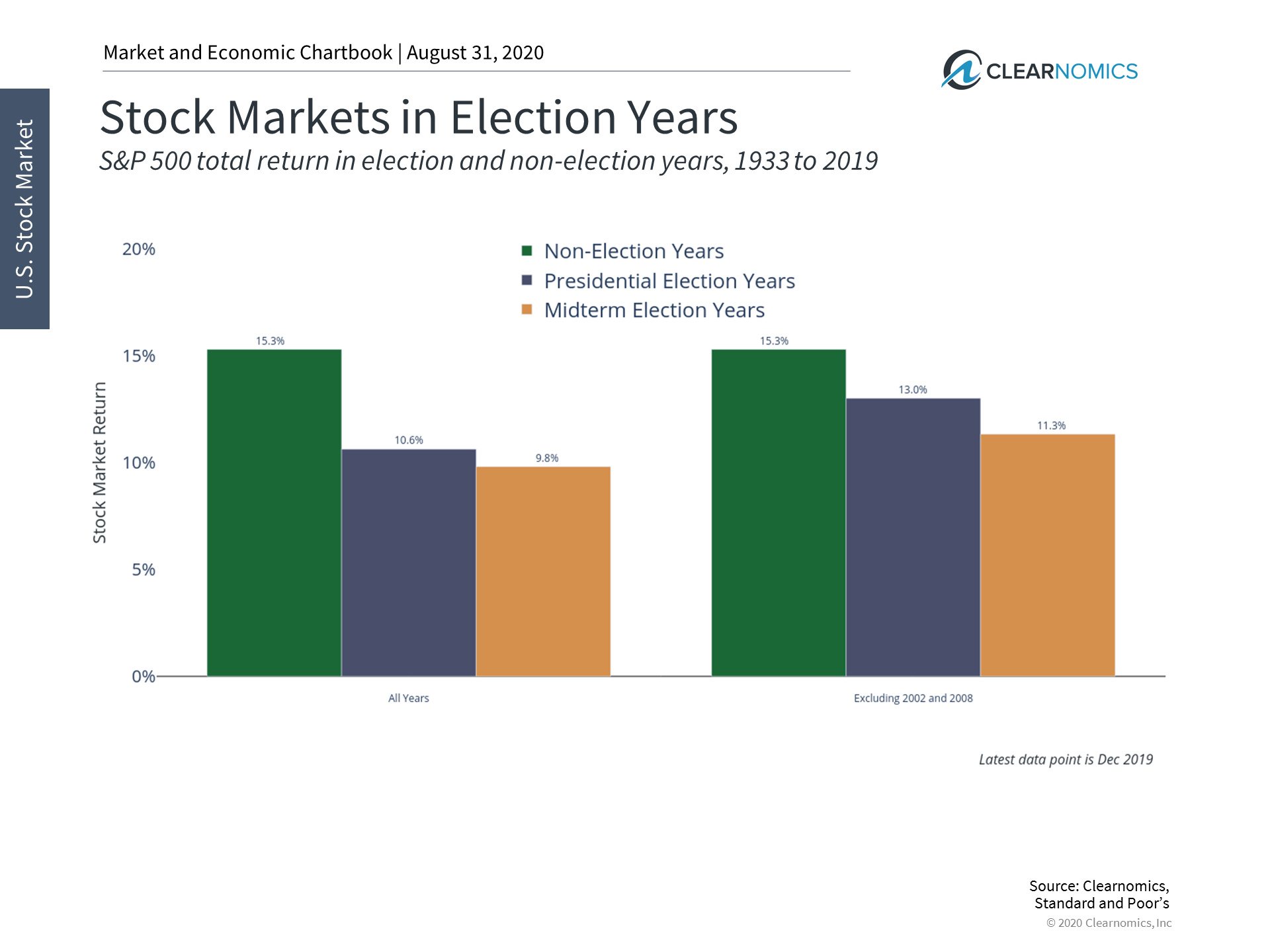 While it does appear that non-election years tend to have higher returns on average than election years, this difference is small after excluding 2002 and 2008. Additionally, the fact that all years are positive means that avoiding election years is generally not supported by history.
3. In the long run, economic trends matter more than politics

Stock Since the Great Depression 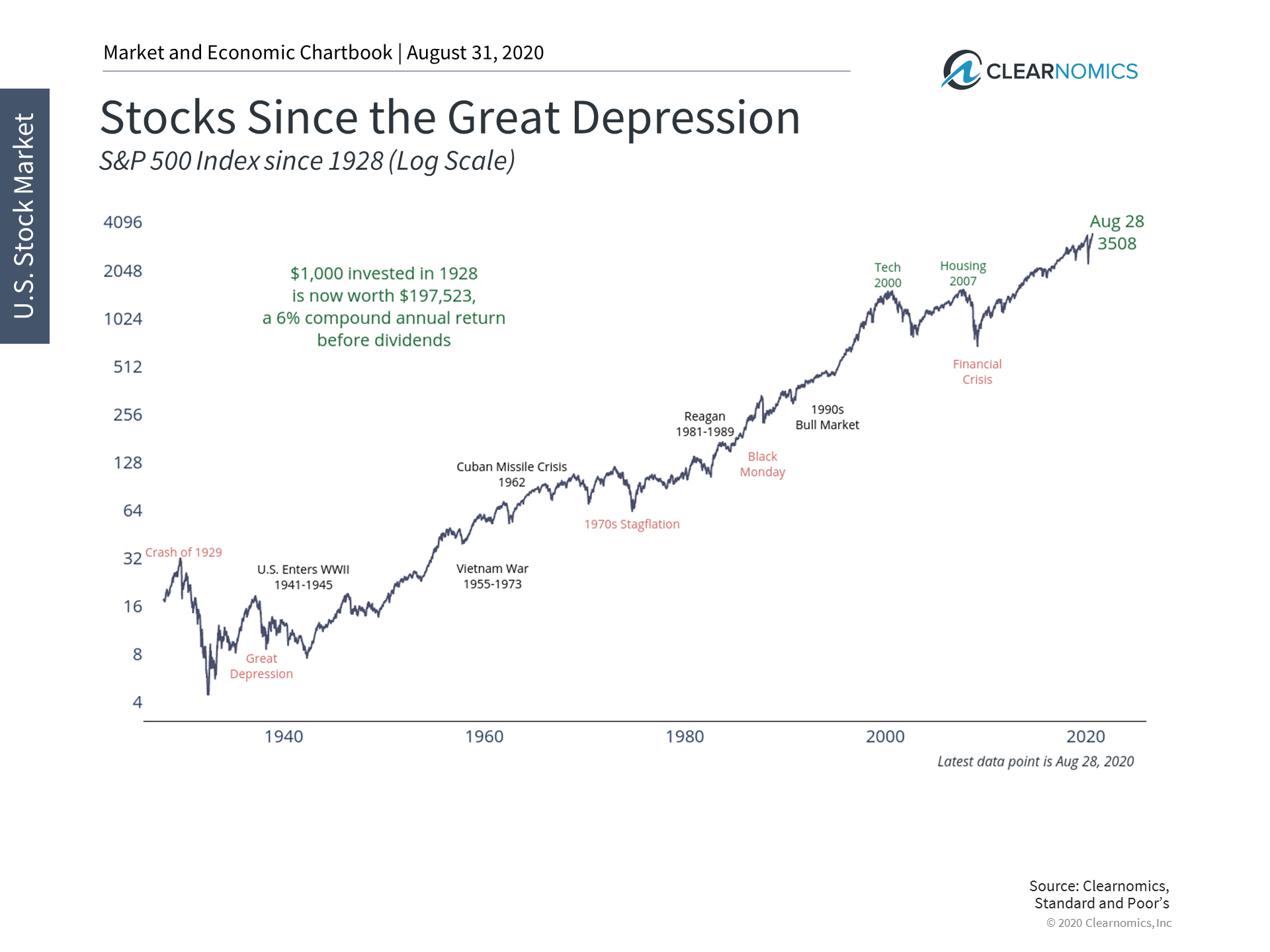 Over the past 90 years, the stock market has trended upward due to innovation and economic growth. This has been the case despite global conflicts, financial crises, recessions and a pandemic while different parties have controlled the White House and Congress.

The bottom line? In the long run, it's economic growth that matters. There is no simple way to predict stock market returns based on presidential elections. Long-term investors should stay focused and not over-react to day-to-day election coverage.