In the U.S., consumer spending is the backbone of the economy, constituting over two-thirds of our $20 trillion GDP. This includes spending on all goods and services, large and small. In normal times, many factors affect the level of consumer purchases including consumer confidence, the job market, household net worth, inflation, the stock market and more. Of the various components of GDP, consumer spending has been the most stable over the past decade at a time when government spending has fluctuated, business spending has been low, and the country has been a net importer of goods.

However, it should come as no surprise that the economic shutdown due to the coronavirus has resulted in plummeting consumer spending. Not only are some consumers unwilling to spend due to economic and stock market uncertainty, but for the first time, the nationwide lockdown means that many are barred from doing so. Some substitution of spending has taken place, e.g. from restaurants to grocery stores or from in-store to online, but this doesn't begin to make up for the overall decline. For instance, after growing an average of 4% per year, there are signs that retail sales shrank by 6.2% in March. Clearly, numbers for April and beyond could be much worse.

Given the importance of consumer activity, there are three considerations when it comes to the broader economy once the country begins to reopen. First, while some portion of this spending is likely to be lost forever, especially when it comes to dining out, some purchases may simply be delayed. New automobiles, for instance, will be needed regardless of whether they can be pushed back a few months. The same is true of other durable goods and household necessities which can only be fixed with duct tape for so long.

Second, consumers will only make up delayed purchases if they are in a financial position to do so once the economy reopens. Fortunately, average household debt levels are much lower this cycle than in the past, making it more likely that many can weather this crisis. This is especially true when low mortgage rates are taken into consideration.

Of course, not all households are created equal which is why government support, including via the CARES act, has been important. However, like the economy as a whole, the average American consumer was in a healthy position entering the crisis. Overall household net worth exceeded $118 trillion according to the Federal Reserve's last estimate, unemployment was near 50-year lows and wages were rising faster than inflation.

Third, the silver lining, to the extent there is one, is that household savings rates have skyrocketed to 40-year highs over the past several weeks. This is the obvious flipside to a lack of spending - for those receiving paychecks, more will be kept as cash and investments. Additionally, for those who are in a position to borrow and spend, interest rates will likely remain low for quite some time, with the 10-year Treasury yield currently hovering around 0.6% and the 30-year mortgage rate under 3.5% nationwide.

Thus, those who were ready to make larger purchases before this crisis may find it even more attractive to do so in the coming months. While the consumer spending and retail sales numbers may be worrisome, some will likely make catch-up purchases once the economy reopens. Investors with a long-term perspective should see through the current decline to better understand the future of the economy. Below are four charts that help to put the state of the U.S. consumer in perspective. 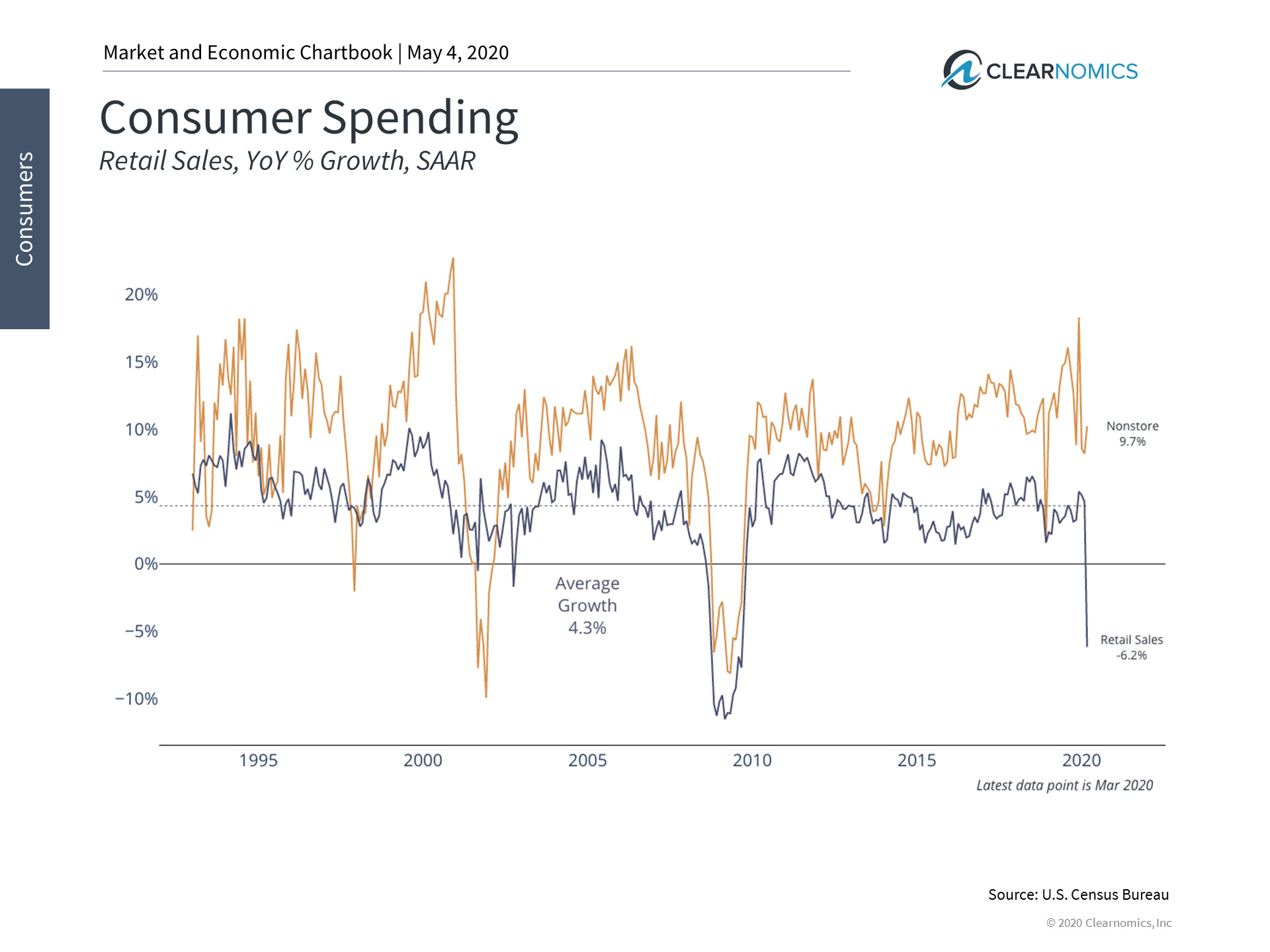 As expected, retail sales have plunged due to the nationwide shutdown from the coronavirus. Non-store sales (i.e. online retailers) have held up better than brick-and-mortar stores, although this may change as new data become available. Overall, consumers have cut back on discretionary spending due to an inability to shop and a reduced willingness to do so given the economic environment.
2. Spending on large durable goods have fallen as well 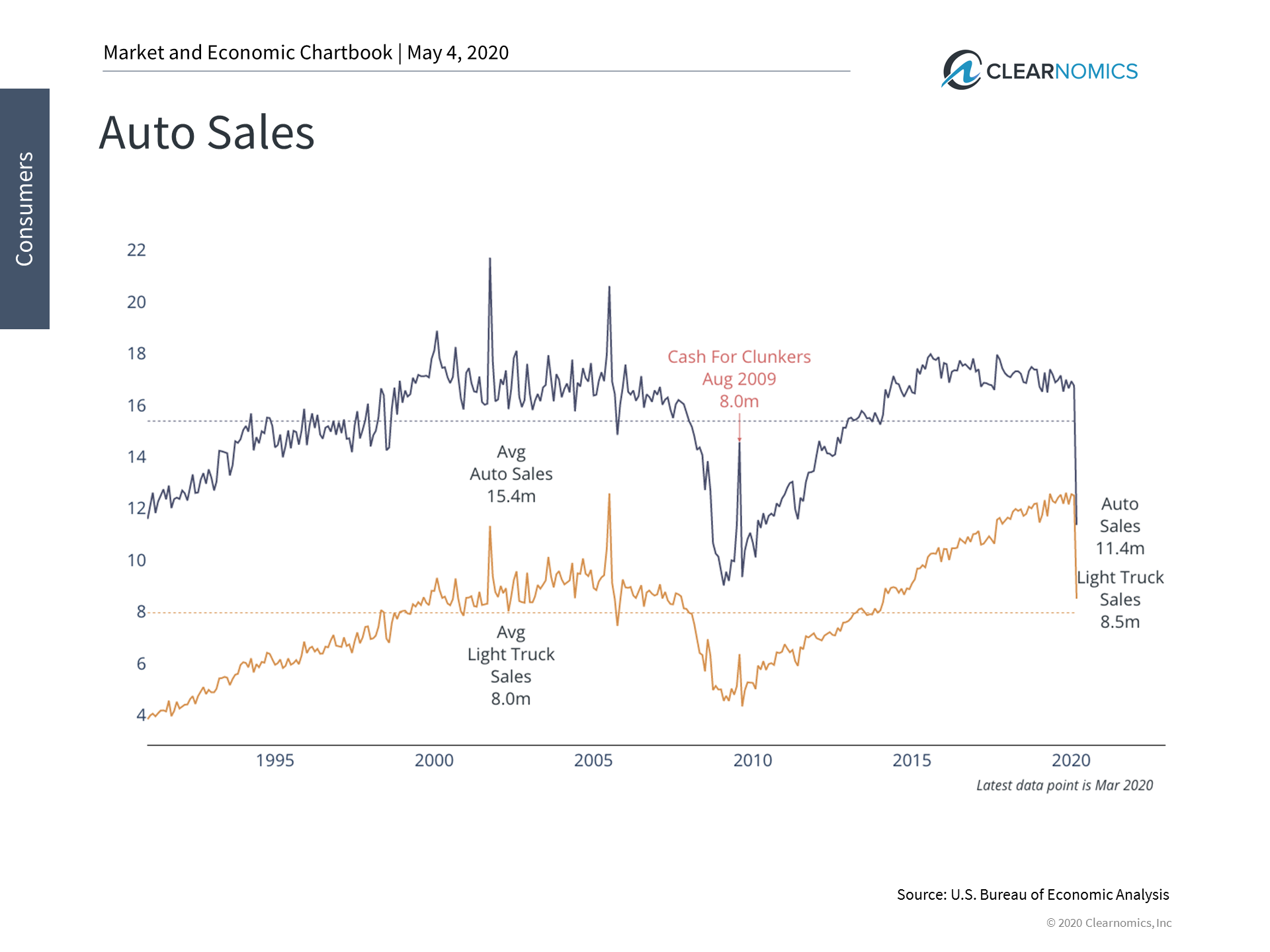 This is also true of larger purchases, including cars and trucks. However, these purchases are different since many Americans need cars even if they are able to delay these purchases by a few months. The same is true of household appliances and other durable goods.
3. Households are in a better debt position than in the past 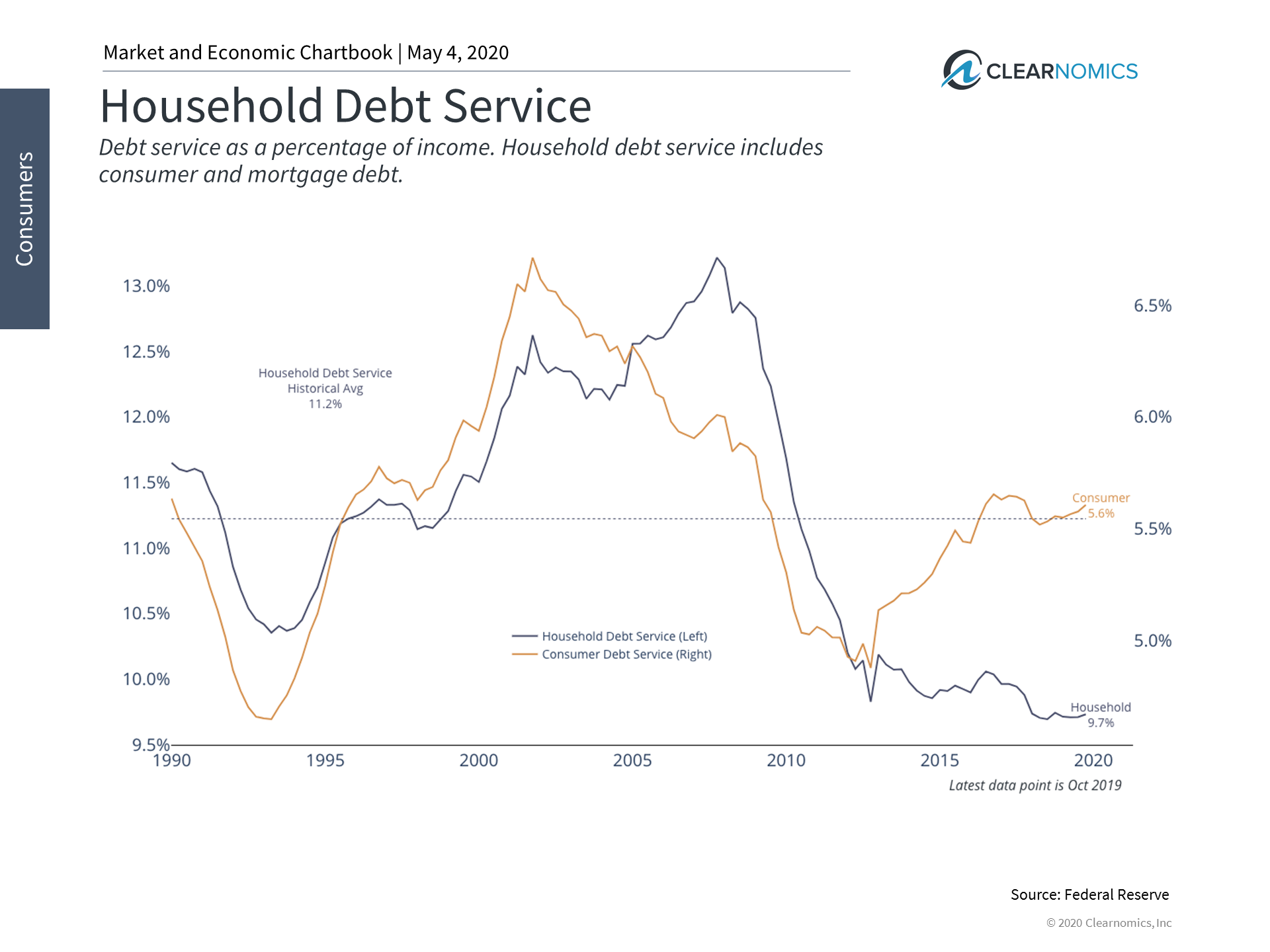 Fortunately, households are in a better debt position than in the past. Overall household debt service (the amount spent paying down debt) has remained relatively low. This is in no small part due to lower interest rates for mortgages. Excluding mortgages, overall consumer debt service (the orange line in the chart above) has increased, but is still lower than during the mid-2000s.
4. Savings rates have skyrocketed in recent weeks 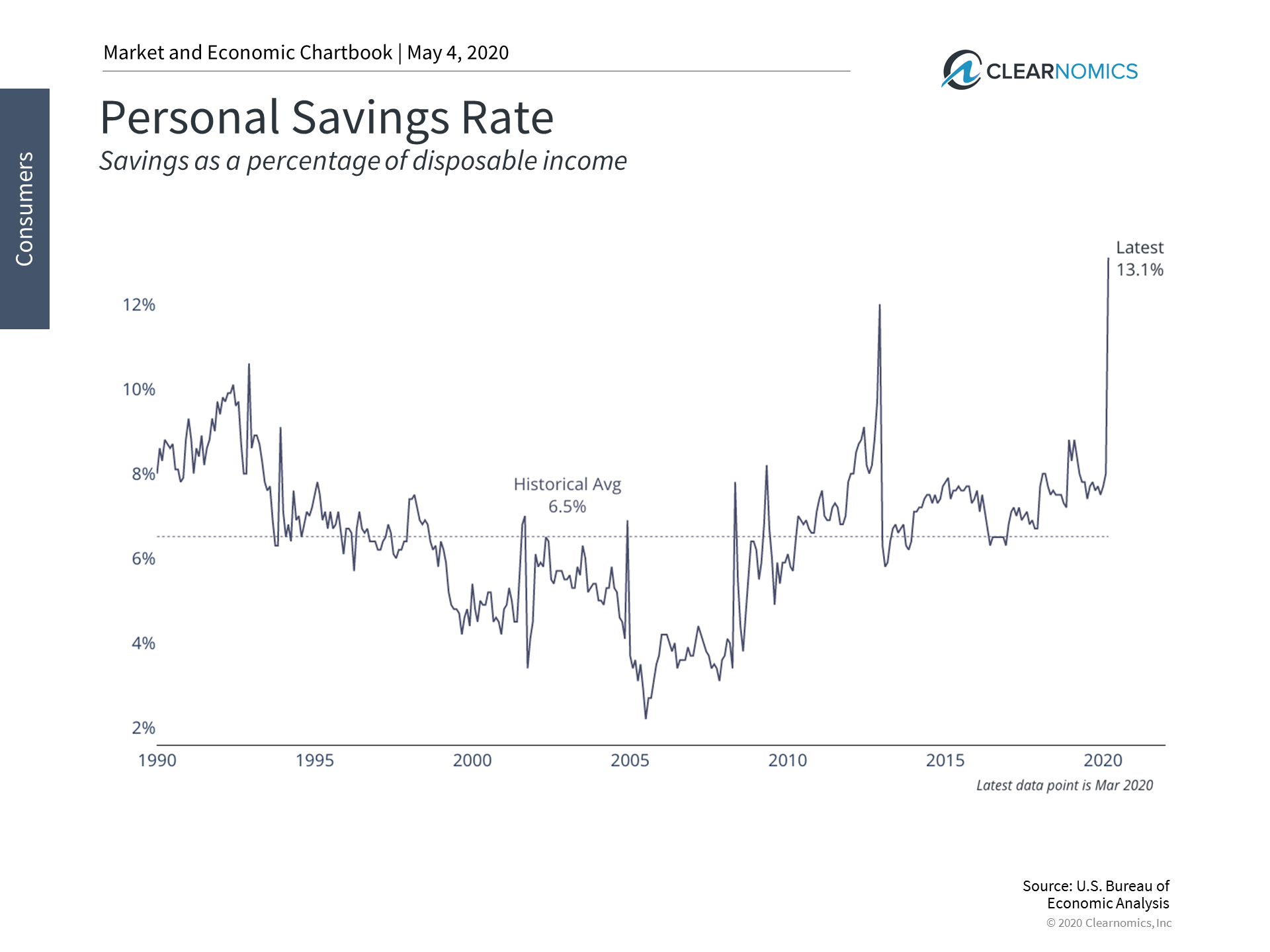 Unsurprisingly, personal savings rate have jumped due to the lack of spending. On average, this means that some consumers will be in a better financial position once the economy reopens, and may potentially make up for some postponed purchases.
The bottom line? While spending has plummeted, some consumer purchases could restart once the economy reopens. Long-term investors should continue to focus on these economic fundamentals as the crisis continues.