In the world of competitive cycling and bike racing, it's often said that there are only two types of cyclists: those that have crashed and those that will. The same is not only true of market cycles but of investors. If history has taught us anything, it's that bear markets are an unavoidable part of the stock market's behavior. Given this fact, the best thing that investors can do is to have an appropriate financial plan and balanced portfolio, while seeking proper guidance. Eventually, even the worst market downturns give way to bull market recoveries.

While investors should trust in their hard work and preparation, this doesn't make market downturns any less challenging as they are happening. As such, many investors naturally have questions about what took place during the first quarter and what will matter in the quarters ahead. To better understanding what is happening in the markets, it's helpful to separate the coronavirus from how it affects the economy, the ripple effect across industries, the government's response, and what investors can do to protect themselves across all parts of the market cycle.

The U.S. stock market officially entered a bear market in March with the S&P 500 finishing the first quarter down 20%, falling as much as 34% at its lowest point. With the index at all-time highs as recently as mid-February, this was a swift decline. However, market swings have been large in both directions, with several large positive moves as well. Global stocks have performed similarly with developed markets and emerging markets declining 23% and 24% respectively during the quarter, as shown in the following chart.

Of course, some perspective is needed here. The S&P 500 is still up 15% over the past three years and 280% since the market bottom in 2009 - numbers which don't even include dividends. 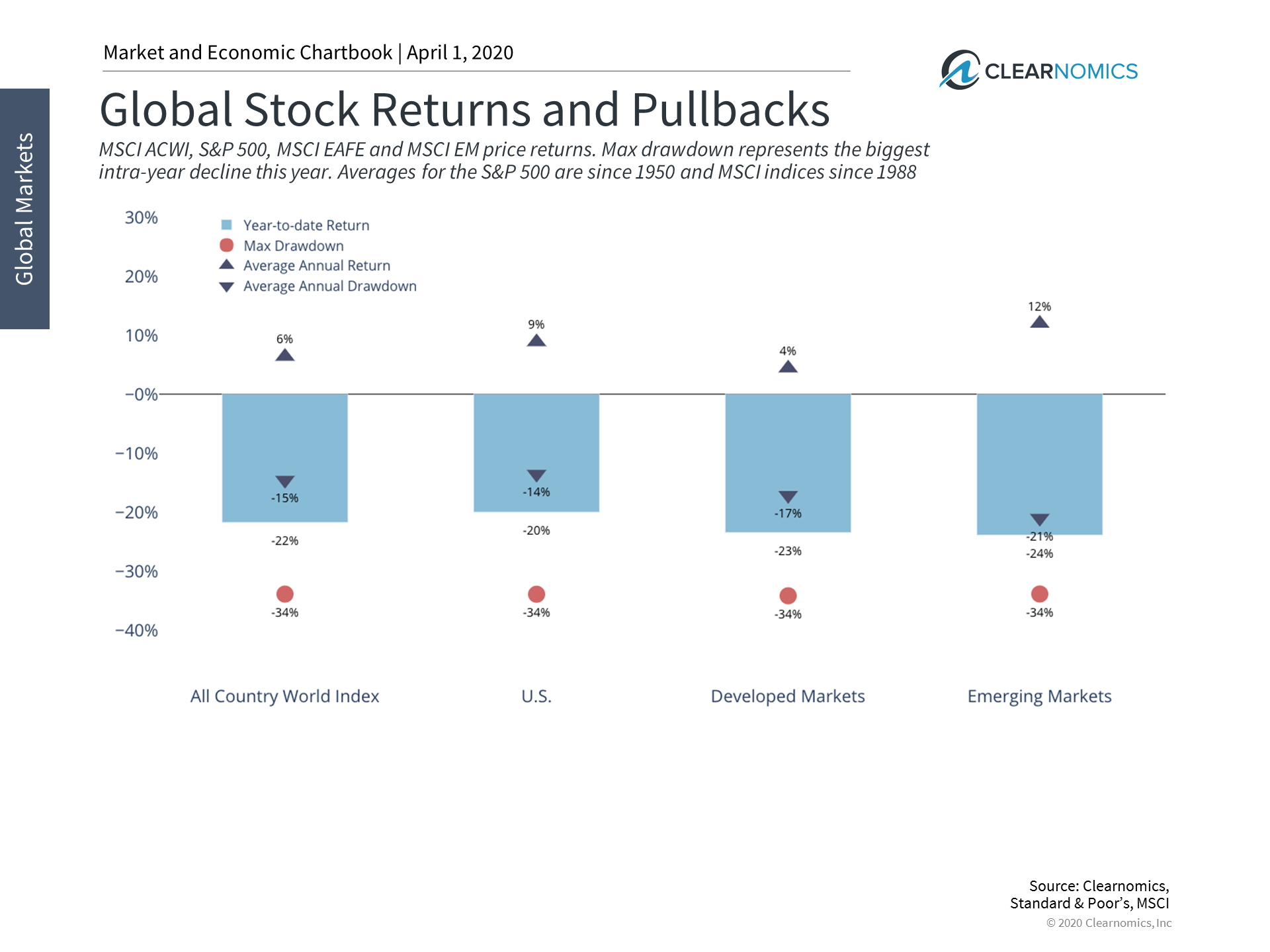 Interest rates also plummeted in Q1 as investors sought the safety of U.S. Treasuries. The 10-year Treasury yield fell to its lowest level in history, ending the quarter below 0.7%. Due to emergency Fed rate cuts, the yield curve has actually steepened in recent weeks with short-term rates declining even more. Oil prices also fell significantly with WTI priced at around $20 per barrel due to limited demand and excess supply.

In the middle of a bear market, these are the types of numbers one would expect. Unlike other factors that have resulted in market volatility over the past few decades, nothing has turned everyday life upside down like the coronavirus. The fact that its spread is exponential, depicted in the chart below across states, means that the public health and economic picture has changed rapidly. At the moment, states and cities are locked down in an effort to mitigate the spread and the burden on the healthcare system. The critical side effect of these societal measures is the deep financial impact on many businesses and individuals. 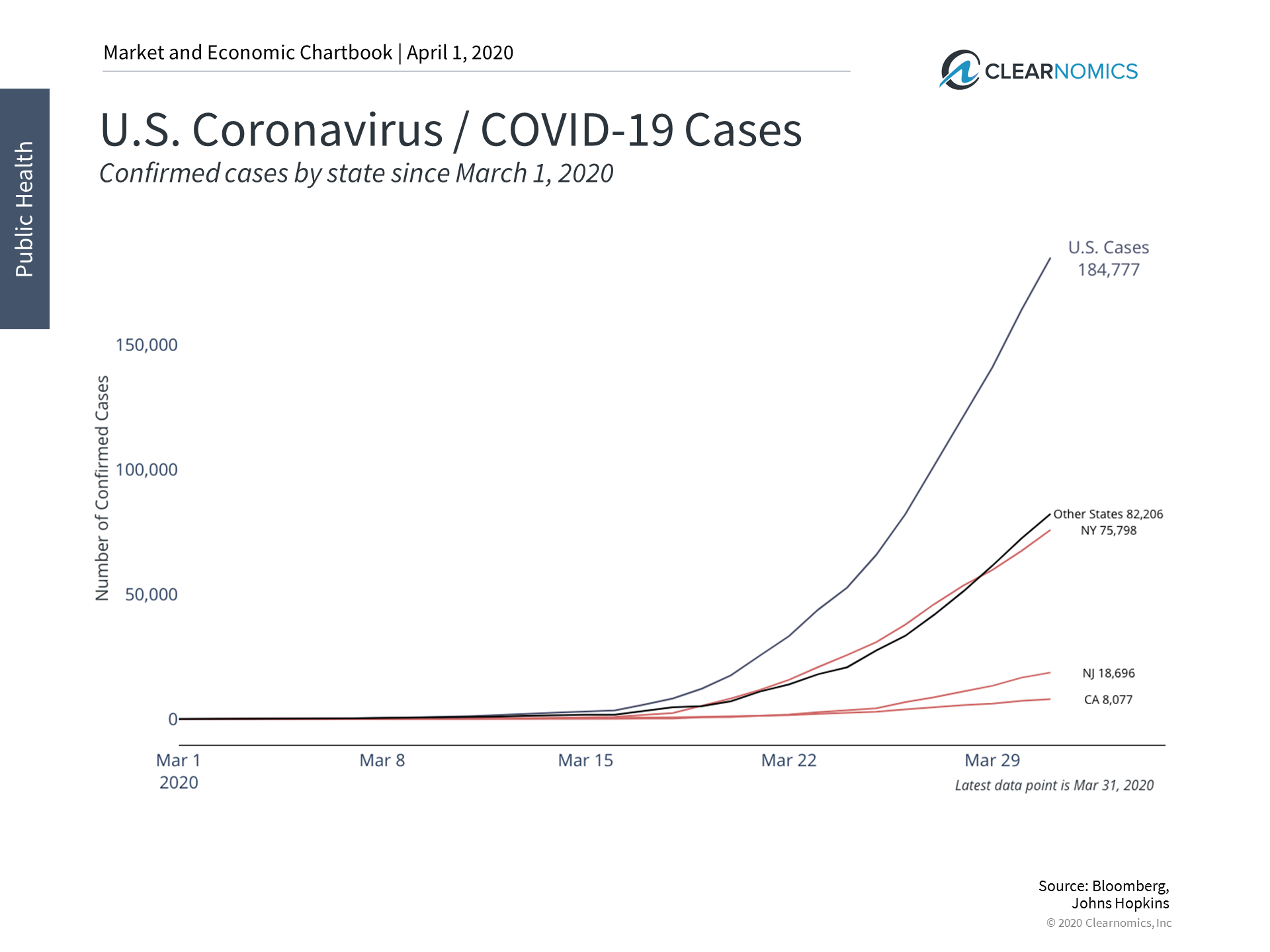 The Economic Impact of the Coronavirus

While it's unclear how long these lockdowns will last, their effects are now being seen in the economic data. For instance, initial jobless claims spiked from about 200,000 per week to 3.3 million recently. However, economic data on their own can only tell us about what has already taken pace. In normal times, we rely on this data to help us paint a picture of what is happening beneath the surface. In this case, we not only know the underlying cause, but we also know that the numbers will get worse. Many economists are expecting unemployment to rise well above 10% and GDP growth to slow to recession levels for at least a quarter or two. 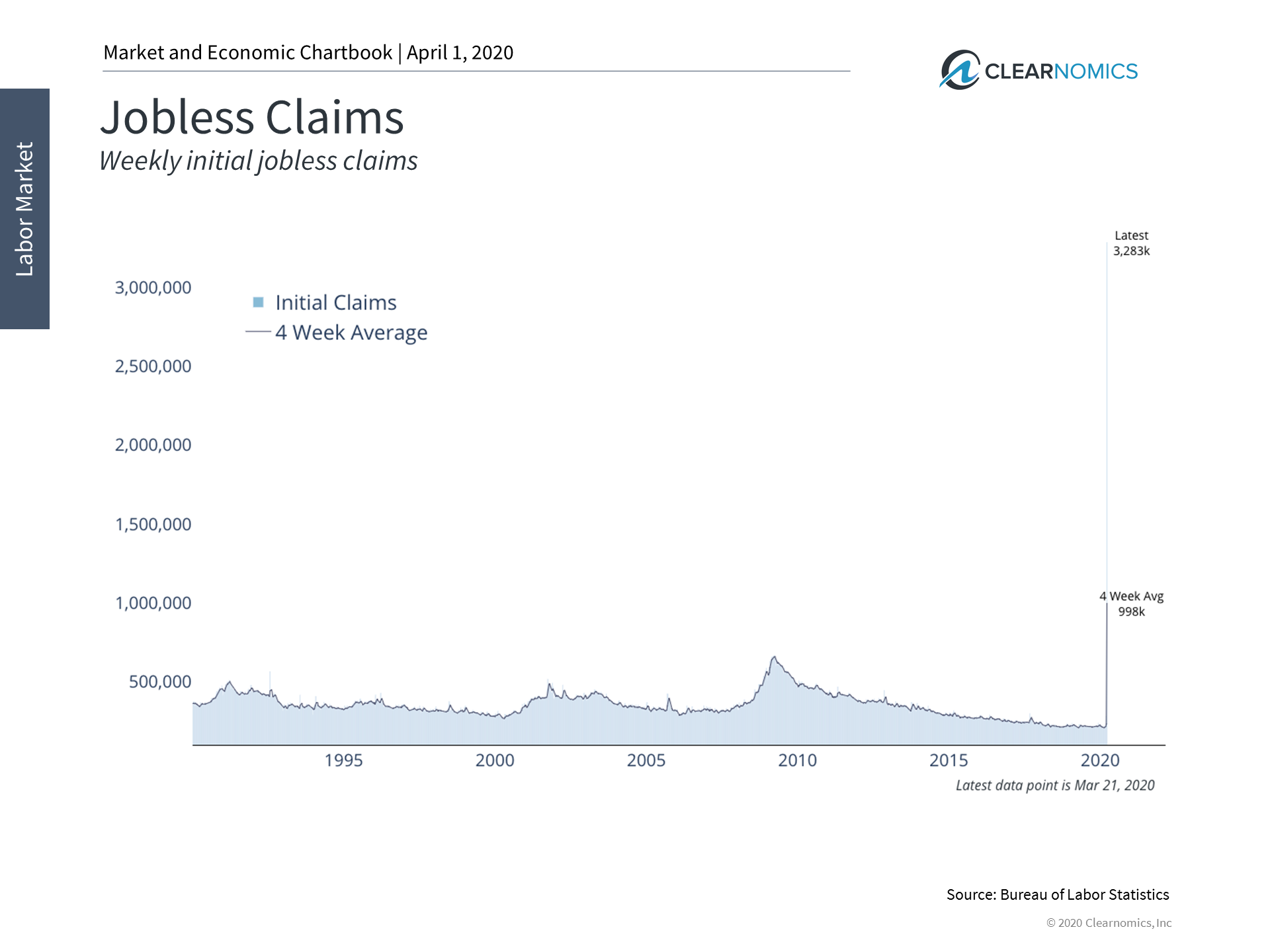 The fact that the economy was fundamentally healthy going into this crisis increases the likelihood of a full recovery. Whether businesses and individuals can reach the other side will depend on the strength of their balance sheets, access to capital, and the government's response. This is because the problems being faced are not ones inherent to the economy itself - this is not 2008 when many individuals and financial institutions were significantly over-leveraged. However, without assistance, it's possible that short-term financial distress could result in long-term solvency problems.

For instance, a shop owner might be able to survive for a few weeks or months even as bills pile up. In the worst-case scenario, the shop owner would have to lay off workers, furlough staff or shut down the business, even if they would be economically sound otherwise. If this scenario is multiplied across the whole economy, cracks could begin to form. One indicator of this is in the credit market where bond yields spiked as concerns of company financial situations increased. They have settled down slightly along with overall market volatility, but many investors are still concerned. 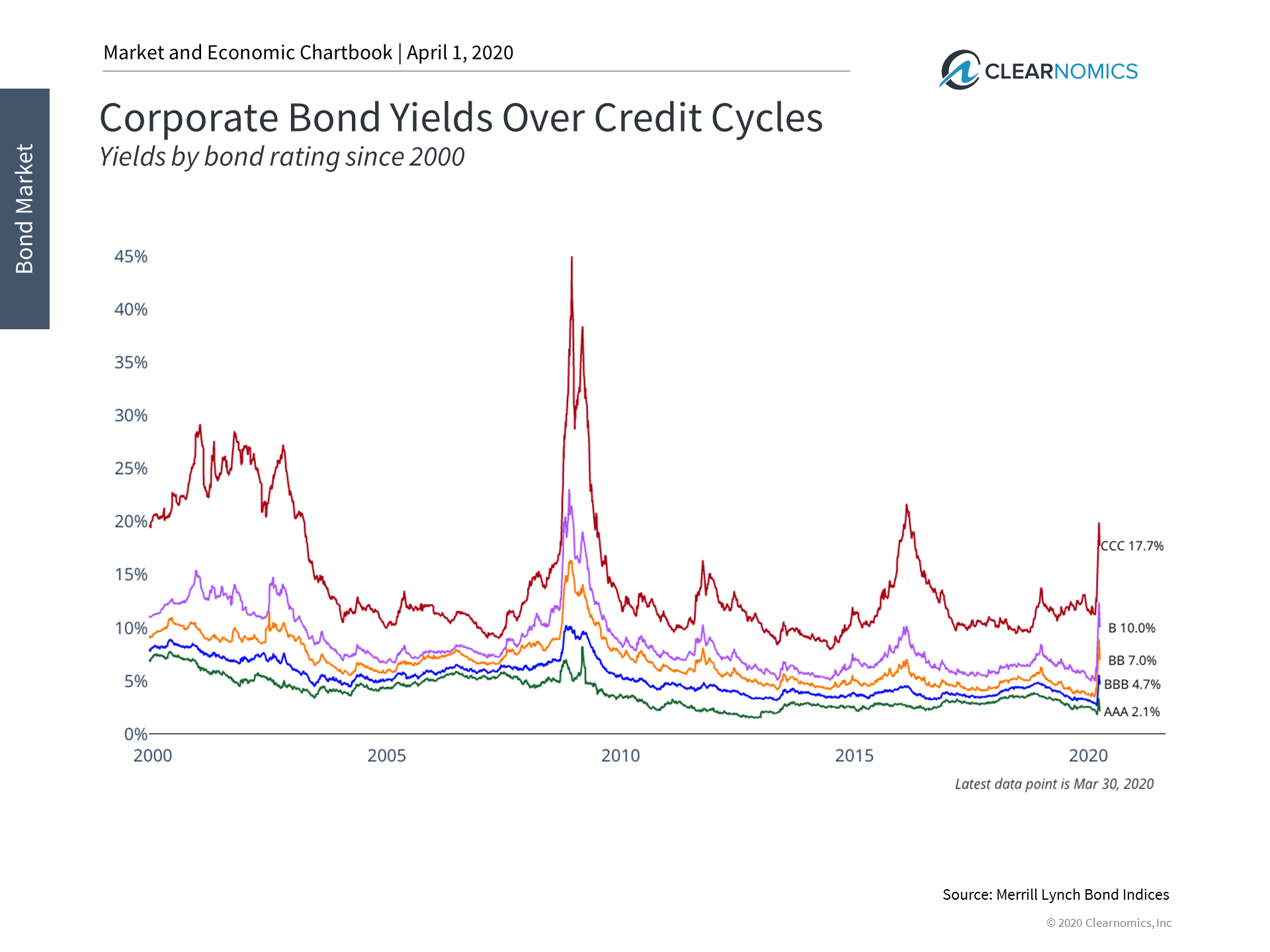 It's for these reasons that the government has pulled out all the stops. In times of economic crisis and downturns, the government is in a position to spend when others aren't in order to keep the economy on life support until it has recovered. As a matter of principle, philosophy and politics, this has been a controversial topic among economists for centuries. As a practical matter, there are few alternatives. The Federal Reserve has cut interest rates to zero and has activated a number of programs from the 2008 financial crisis, including open-ended asset purchases (i.e. quantitative easing). Congress passed a $2 trillion bill, the largest in history, to provide stimulus checks to households, forgivable loans to small businesses, bailouts to some critical industries, and more. 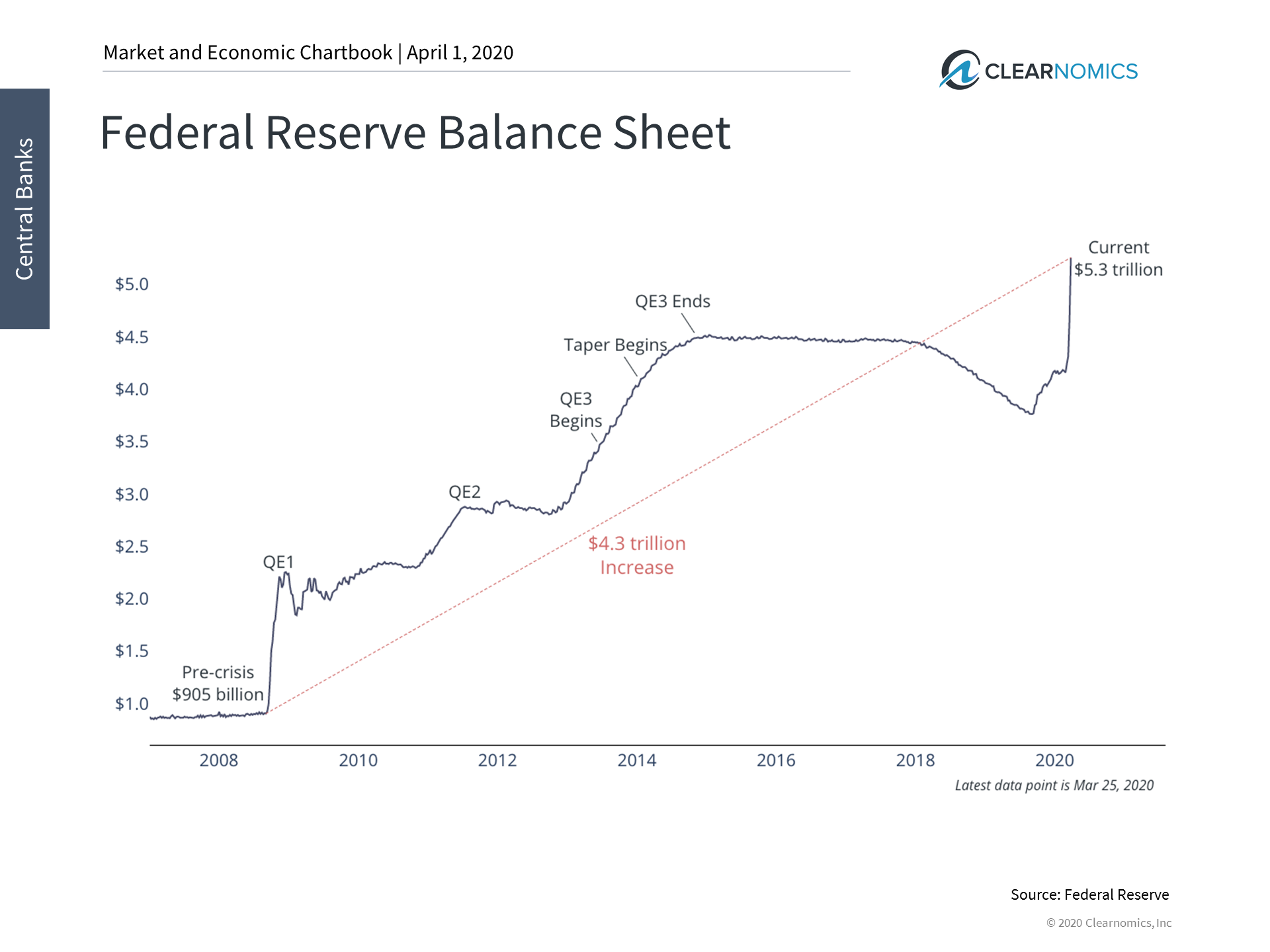 How soon Americans can return to work and shops can reopen depends on the spread of the coronavirus. The experience in China and elsewhere suggest that this could happen within the next couple of months if the virus is contained. If individuals and businesses can make it to the other side while staying safe and healthy, then work can resume and the economy can get back on track.

In times of uncertainty, the only thing we can directly control is our own behavior. While the cause of this bear market is unique, the fact that the market has declined is not. Market corrections and bear markets are natural parts of the stock market and of the investor experience. 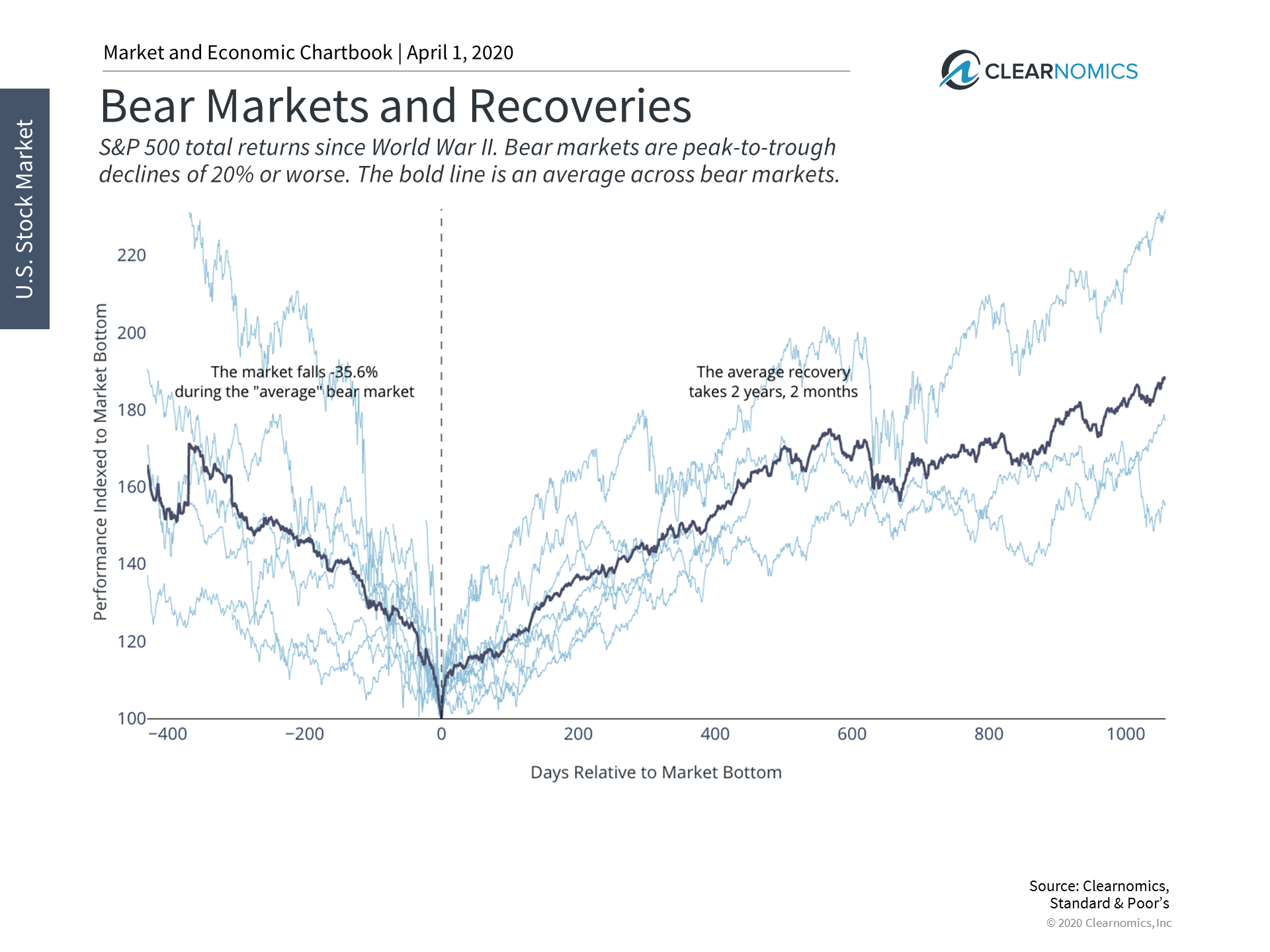 While bear markets are typically defined as declines of 20% or more from recent peaks, they are usually much worse. True bear markets almost always occur alongside economic recessions, and this one is no exception. On average, these economic crises result in market declines of about 35%. Coincidentally, the worst decline for global markets this year has been nearly that amount.
So, what can investors do? First, it's important to view bear markets with the proper perspective. Not only are bear markets a normal part of the cycle, they often turn around when it's least expected. For instance, the stock market began to recover from the 2008 financial crisis in March of the following year when there was still significant uncertainty in the world. The average bear market then fully recovers over the next couple of years. Missing out on the subsequent gains makes the bear market experience that much worse. 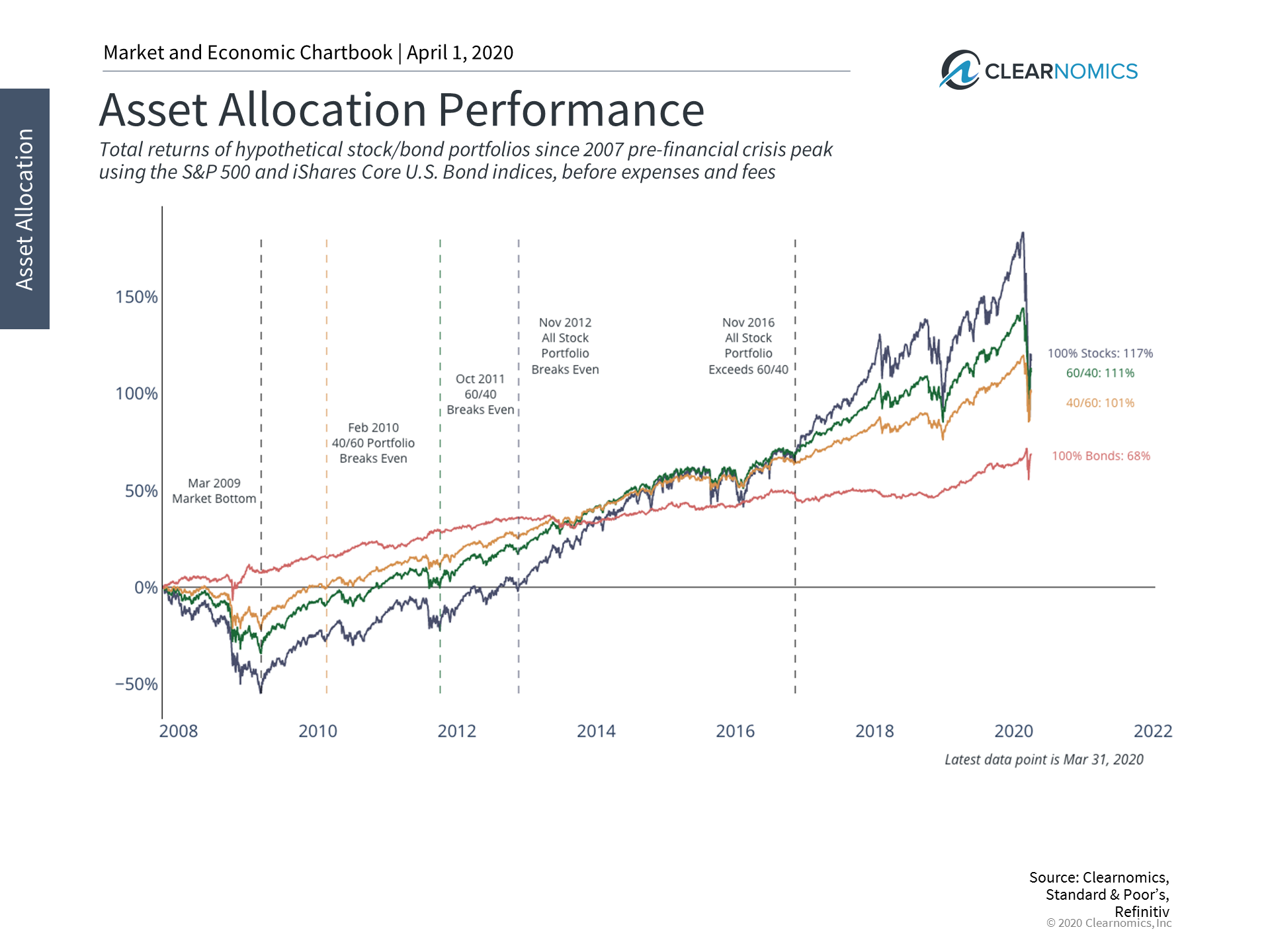 Second, balanced portfolios often perform far better than stocks alone across the full market cycle. The chart above shows this dynamic since 2008. This is because high quality bonds often outperform as interest rates fall and investors seek safety. During the 2008 financial crisis, these balanced portfolios fell far less than all-stock portfolios and then recovered far more quickly. A hypothetical portfolio consisting of 40% bonds and 60% stocks would have recovered in only 11 months from the market bottom. Even today, diversified portfolios are still neck-and-neck with aggressive all-stock portfolios.

This is exactly what balanced portfolios are designed to do across all phases of the market cycle. Thus, in times of economic crises and market uncertainty, it's important for investors to remain disciplined and consider their financial plans and portfolios. These are all factors that investors can control in the months ahead, regardless of how the fight against the coronavirus plays out.

The bottom line? Investors should continue to set expectations around poor economic data and market uncertainty. They should focus on remaining disciplined and ensuring their balanced portfolios match their long-term financial goals.